The hemolymph of the silkworm Bombyx moriI contains a self-defense mechanism termed the "prophenoloxidase (proPO) activating system" or "proPO cascade" . Upon invasion of microbe such as bacteria and fungi, the system participates in melanin formation observed in the body fluid of insects to protect them from the in invader's attack. The system is triggered by peptidoglycan (PG) from bacteria and (1→3)-β-D-glucan (β-glucan )from fungi and yeast, and yeast, and consequently, proPO in the system is activated.
The system is thought to be a cascade reaction involving activation of multiple zymogens of proteinases.
The SLP (Silkworm Larvae Plasma) reagent is a lyophilized product containing factors of the proPO cascade, it is prepared from silkworm larvae body fluid and processed without melanin formation. The SLP reagent is activated by PG and/or β-glucan, then L-3,4-dihydroxyphenylalanine(DOPA) is oxidized and melanin is formed. Since PG is found on the cell wall of most bacteria and β-glucan is a component found in cell walls of many fungi, it is possible to detect various microorganisms by using melanin pigment formation of SLP reagent as an index.

Since PG is found not only in gram-positive but also gram-negative bacteria, the SLP reagent responds to a wide range of bacteria, regardless of their gram-staining classification. It also reacts with fungus-derived β-glucan, which suggests that it can respond widely to general microorganisms. Therefore, the concurrent use of LAL and SLP reagents, which are activated by endotoxin and β-glucan respectively, enable the type of microorganism in a sample to be predicted.

PG and β-glucan can be detected using SLP-HS Single Reagent Set and an instrument of Toxinometer.
The measurement principle is the same with endotoxin detection method using Toxinometer (Figure 2).
The absorbance change (melanin production) generated by the activation are detected using Toxinometer.
The correlation between the PG(or β-glucan) concentration and Ta is obtained (Figure 3), and the PG (or β-glucan) concentration is calculated from Ta of each sample. 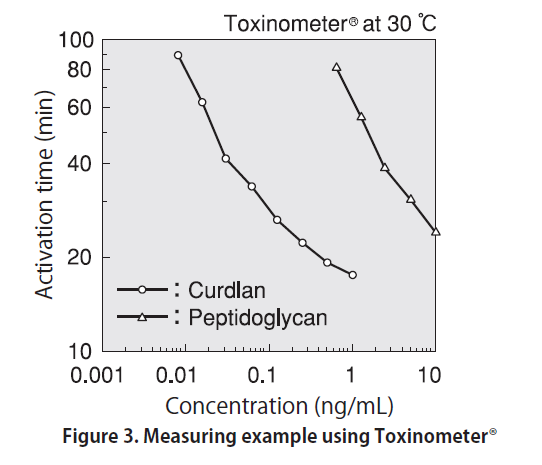