Factors in LAL reagent are activated by the presence of endotoxin, and endotoxin can be quantified by measurement of gel formation, increased turbidity, or yellow chromogen released due to the synthetic substrate cleavage.

A lysate reagent prepared from the amebocytes of horseshoe crab (Limulus polyphemus) is used to detect bacterial endotoxins. As shown in Figure 1, the cascade reactions start by the presence of an endotoxin, whereby Factor C, a serine protease precursor, is initially activated. There follows the subsequential activation of Factor B, also a serine protease precursor and a proclotting enzyme, which hydrolyzes coagulogen into coagulin, forming an insoluble gel. 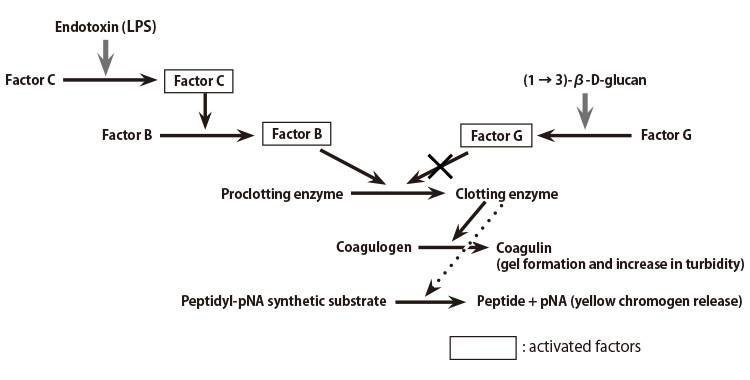 Ordinary LAL reagents react not only with the endotoxin but also (1 → 3)-β-D-glucan (a fungal cell wall component), since the Factor G pathway can be activated in the reagents. To eliminate this (1 → 3)-β-D-glucan activation, various endotoxin-specific reagents are being developed in industry by removing Factor G or inhibiting its activation.
Various LAL reagents are commercially available, as well as measuring systems based on the Figure 1 reaction mechanism. It is essential to select the most appropriate product depending on the required accuracy, test frequencies, number of samples and other relevant factors.
Bacterial Endotoxins Test (BET), namely the gel-clot technique, turbidimetric technique and chromogenic technique, is harmonized with the Japan Pharmacopoeia , the European Pharmacopoeia and the U.S. Pharmacopeia.