Chemical forms of arsenic and their toxicities

Arsenic (As) is an element occurring in the Earth's crust mainly as sulfides such as As3S3, As4S4, and FeAsS. Because it is released into the environment through natural phenomena such as volcanic activity and mineral weathering, arsenic is widely distributed in the atmosphere, rivers, lakes, oceans, and land. In the natural environment, the major chemical forms of arsenic are the oxygen-coordinated inorganic arsenic forms arsenous acid, or As (III), and arsenic acid, or As (V) (Figure 1). Undergoing metabolic conversion via food chains in the marine ecosystem, these forms of arsenic occur in marine organism tissues mainly as organic arsenic compounds such as monomethylarsonic acid (MMA), dimethylarsinic acid (DMA), arsenobetaine (AsBe), and arsenocholine (AsC) (Figuer 1). 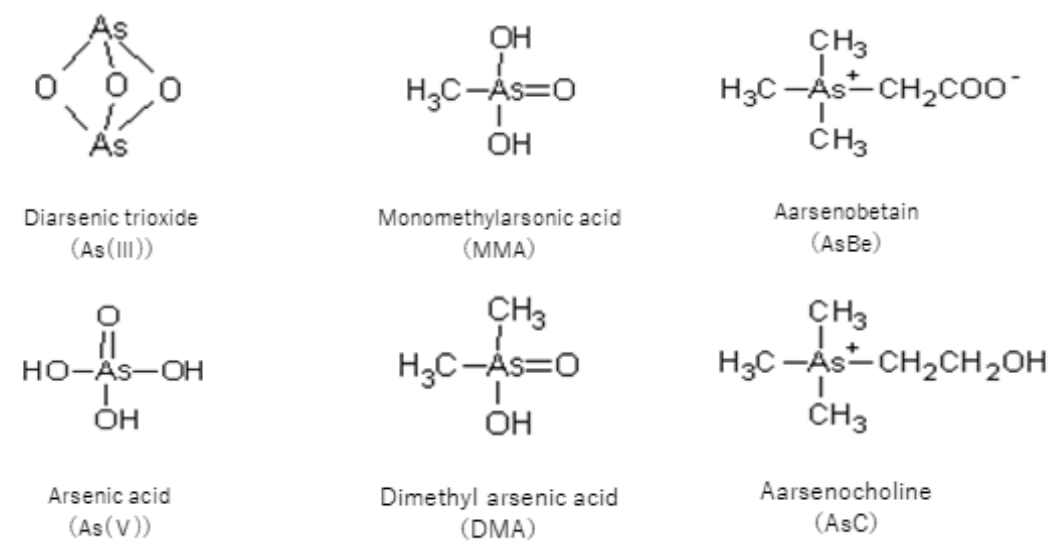 The toxicities of arsenic compounds are known to depend largely on their chemical forms. In general, inorganic arsenic exhibit higher toxicity than organic arsenic, and trivalent forms (oxidation number 3) are more toxic than pentavalent forms (oxidation number 5). In acute poisoning by inorganic arsenic, irritation of oral, esophageal, and other mucosal membranes is followed by esophageal pain, after which vomiting, abdominal pain, diarrhea, and other symptoms develop within several minutes to hours. In serious cases, violent vomiting and diarrhea, muscle cramps, cardiomyopathy, renal impairment, and other symptoms develop, and the patient dies within 24 hours at earliest. Although organic arsenic forms reportedly do not exhibit acute toxicity or peripheral nervous system toxicity, MMA (III) and DMA (III) have been suggested to possibly affect living organisms.

Data on daily per-capita intake of total and inorganic arsenic from a total diet (market basket) study conducted in fiscal 2016-2018 under a MHLW Grant-in-Aid for Scientific Research are shown in Figure 2. 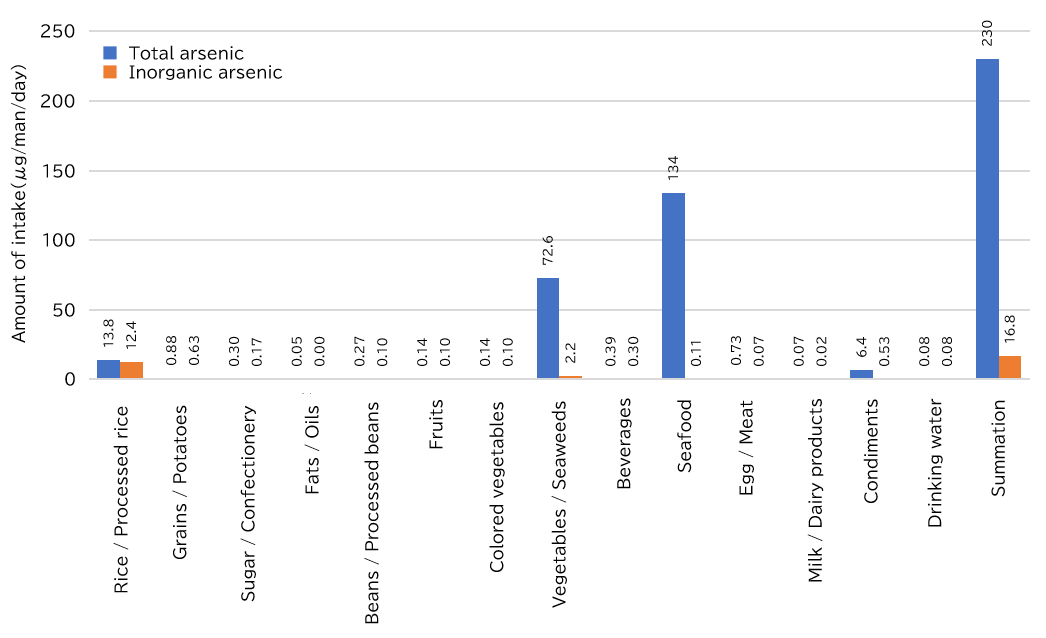 The Codex Alimentarius Commission, an organization working to draw up international food specifications, recognized that rice has higher arsenic concentrations than other agricultural products and thus contributes largely to the oral intake of inorganic arsenic via contaminated irrigation and/or cooking water, and established reference values for maximum limits of inorganic arsenic concentrations in rice (0.2 mg/kg polished rice, 2014; 0.35 mg/kg husked rice, 2016), and then formulated the Code of Practice for the Prevention and Reduction of Arsenic Contamination in Rice (CXC 77-2017) in 2017. Based on this, the Japanese Ministry of Agriculture, Forestry and Fisheries has been conducting actual status surveys on inorganic arsenic content in rice, and is advancing technical development for the reduction of inorganic arsenic.

With this background, it is necessary to separate inorganic and organic arsenic forms found at low concentration levels in rice, and quantify them. For this purpose, HPLC/ICP-MS, a combination of high-performance liquid chromatography (HPLC) and inductively coupled plasma mass spectrometry (ICP-MS), is widely used. The chemical form analysis procedures are designed to avoid changes in the chemical forms of the various arsenic compounds during pretreatment processes such as extraction, heating, and dilution (Figuer 3). 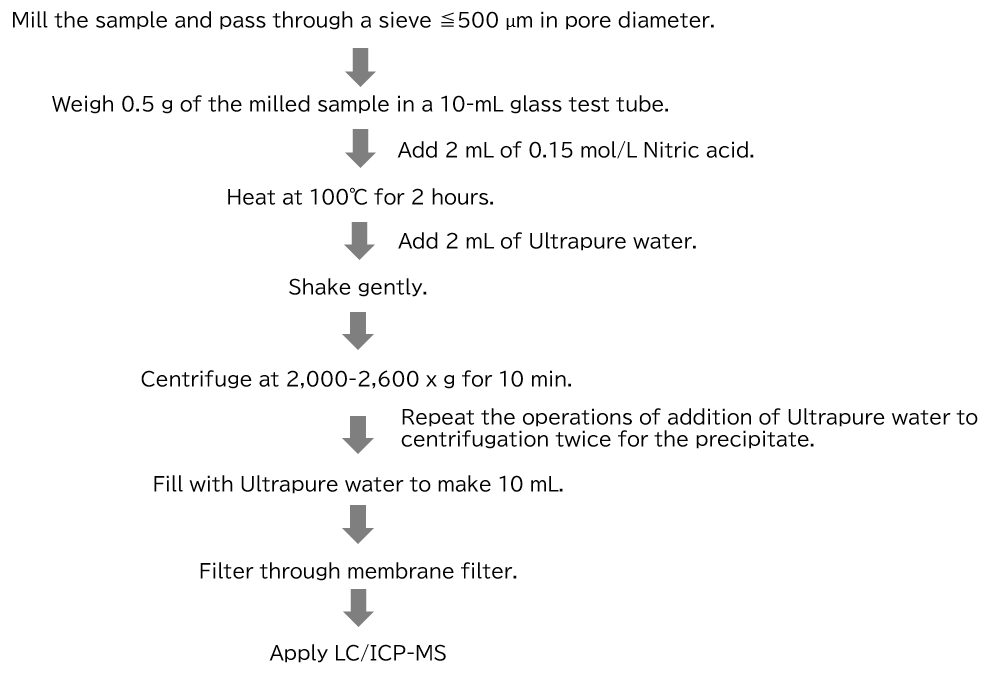 HPLC is suitable for the separation of the various arsenic compounds, whereas highly sensitive ICP-MS is suitable for the detection of the separated compounds. The arsenic compounds have different acid dissociation constants and can occur in multiple forms concurrently, such as in anionic, cationic, amphoteric, and non-ionic states, depending on the mobile phase pH conditions; therefore, reversed-phase ion-pairing chromatography is often used, with sodium 1-butanesulfonate as the ion-pairing reagent for the analysis of basic compounds, and tetramethylammonium hydroxide as the ion-pairing reagent for the analysis of acidic compounds (Figure 4). Being highly reliable as validated by inter-laboratory joint experiments, this analysis method is used for contamination status surveys and other purposes. 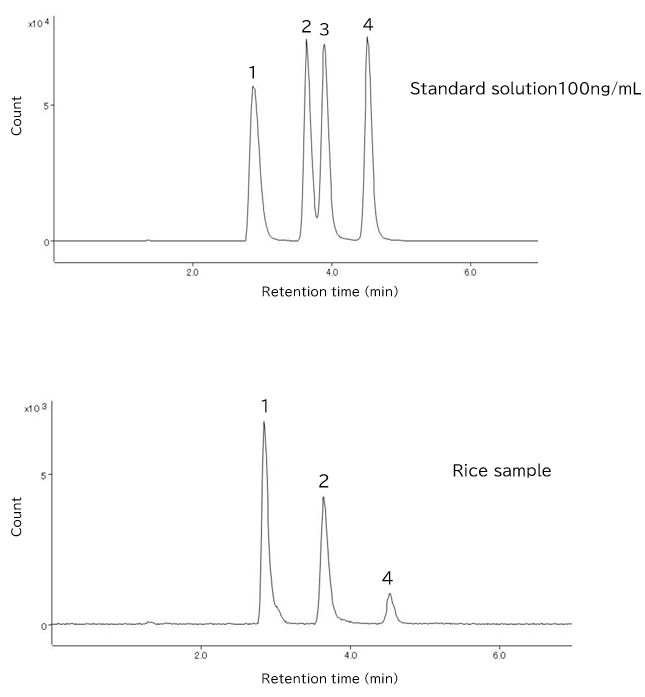 Although rice and the seaweed "Hijiki" are richer in inorganic arsenic than other foods, it has not been reported that they have adverse effects on health such as causing arsenic poisoning within the normal range of intake based on Japanese food culture. As an assessment conducted by the Food Safety Commission of Japan has concluded, "There is no problem if a balanced dietary lifestyle is maintained."; it is important that we endeavor to have a balanced dietary lifestyle without preference for particular foods.