This series of articles has outlined the role of brain-derived neurotrophic factor (BDNF) in the normal development and function of the central nervous system (CNS) and its possible involvement in the pathogenesis of psychiatric disorders, including schizophrenia (SZ) and autism. Since Barde and Thonen reported the isolation of BDNF protein exactly four decades ago1), nearly 30,000 papers on BDNF have been published to date (As of September 2022, PubMed). This underlines the importance of BDNF. On the other hand, however, the number of these papers published in top journals has been declining year by year. So, does this mean that the basic functions and mechanisms of BDNF have already been elucidated and that there are no more major mysteries left? In this final article of the series, I will discuss some representative hot topics and provide an outlook for the future of BDNF research.

As described in the previous article by Takei, the name BDNF usually refers to the mature form (mature BDNF). The initial form of BDNF protein generated from mRNA is called pre-proBDNF, which has a signal sequence in its N-terminal region. Pre-proBDNF is inserted into the lumen of the rough endoplasmic reticulum (ER) and the signal sequence is cleaved to form proBDNF2). The pro-forms of neurotrophic factors, including proBDNF, have long been regarded as mere precursors that are not fully functioning. It is only in this century that we have begun to understand their detailed biological functions. In particular, in 2001, Hempstead and his group discovered that the pro-form of nerve growth factor (NGF) has unique properties and bioactivities distinct from its mature form3). Neurotrophic factors including NGF, as their name implies, promote neuronal survival and neurite outgrowth, but pro-NGF has an opposing effect. Pro-NGF binds to the neurotrophic factor receptor p75NTR with a five times higher affinity than mature NGF, and induces programmed cell death, apoptosis in a p75NTR-dependent manner, as well as inhibits neurite outgrowth of superior cervical ganglia neurons3). Mature BDNF is known to be essential for the formation of certain types of long-term potentiation (LTP) of synaptic transmission in the hippocampus4), but Woo et al. found that proBDNF induces long-term depression (LTD) of synaptic transmission in the hippocampus in a p75NTR-dependent manner5). In addition, while mature BDNF increases the spine density of hippocampal neurons, Koshimizu et al. discovered that proBDNF decreases the same density6). Thus, the pro- and mature-forms of neurotrophic factors exhibit opposite bioactivities even though they are products of the same gene, and this characteristic has been likened to the dual "Jekyll and Hyde" personalities7) or "Ying and Yang" principles8) (Figure). 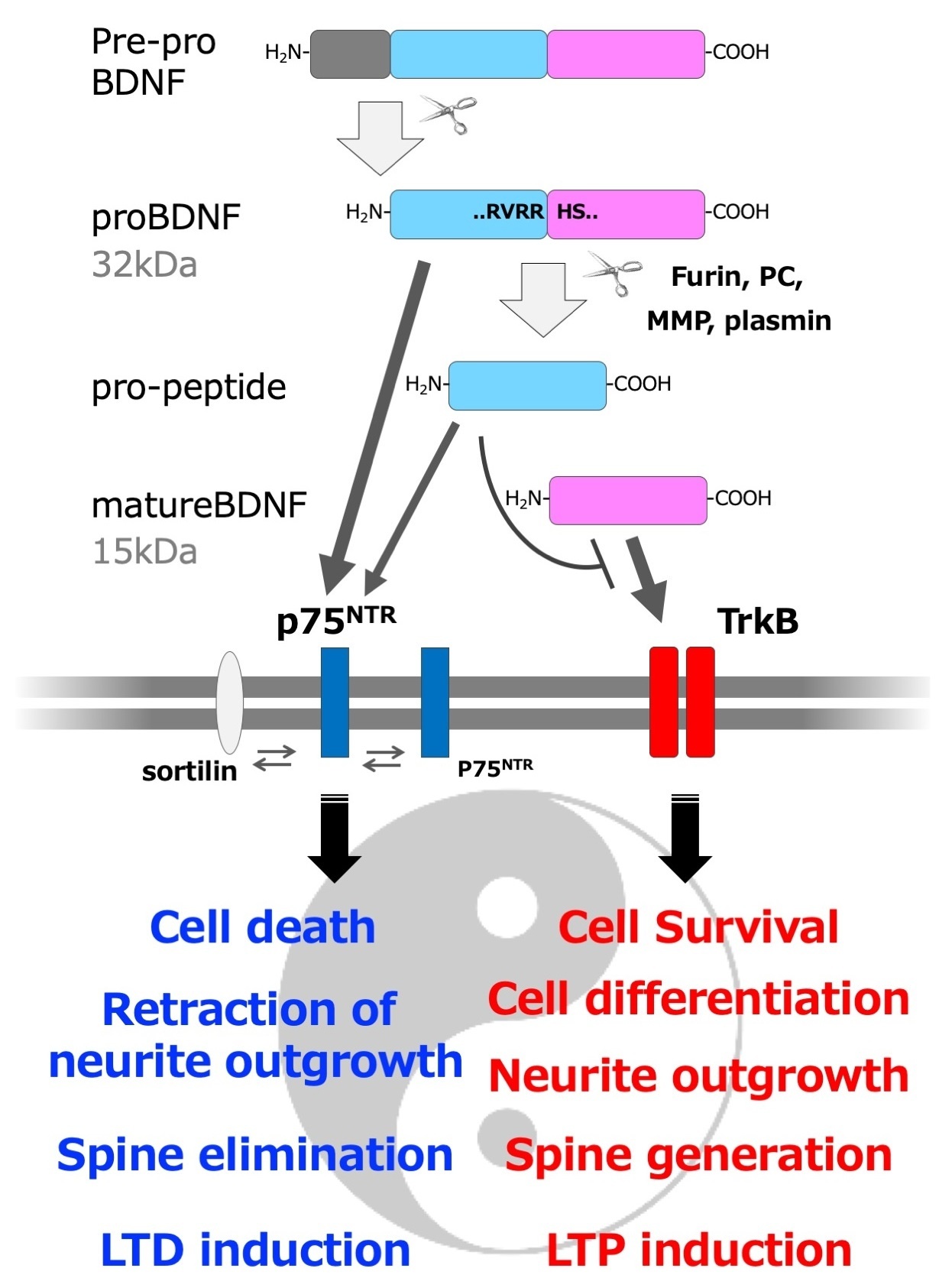 Figure: Three active forms of BDNF (mature BDNF, proBDNF, and pro-peptide) and their "Yin Yang" type of activity. Note that this is a simplified schematic, and there is also low-affinity binding of mature BDNF to p75NTR and promotion of cell survival via p75NTR.

It is expected that an imbalance between the production of mature and proBDNF may have a significant impact on brain function. Hempstead's group and Kojima's group independently generated knock-in mice that express protease-resistant proBDNF9, 10). These mice express proBDNF, but no mature BDNF is produced. As described in the article by Suzuki, many homozygous BDNF-knockout mice die within a few days of birth due to cardiac dysplasia and intramyocardial hemorrhage11), whereas proBDNF-knockin mice do not show such cardiac abnormalities and homozygous animals can survive to adulthood10). However, the hippocampal neurons of heterozygous mice show abnormalities in dendrite morphology and spine density, as well as abnormal electrophysiological properties (suppression of LTP and enhancement of LTD)9). In addition, abnormalities related to psychiatric disorders were observed in behavioral phenotypes. In particular, heterozygous animals showed abnormal nest-building behavior and, if socially isolated, increased depressive-like behavior10). These findings indicate that an imbalance between the production of mature BDNF and its pro-forms may be involved in the pathogenesis of psychiatric disorders.

It is thought that the pro-form is cleaved intracellularly (in secretory vesicles or the trans-Golgi network) by the proteases furin or prohormone convertase 2 (PC2)12), or extracellularly by matrix metalloproteinase (MMP) or neuronal activity-dependent tPA/plasmin13-15) to generate mature BDNF. The truncated N-terminal half yielded in this process is the BDNF pro-peptide, to which little attention has been paid. Mizui et al. found that the BDNF pro-peptide is able to induce p75NTR-dependent LTD in the hippocampus16). Mature BDNF has an inhibitory effect on LTD induced by low-frequency stimulation in the hippocampus, but in the presence of BDNF pro-peptide, the effect of mature BDNF is canceled and LTD induction is further enhanced16). This may be because BDNF pro-peptide specifically binds to mature BDNF with high affinity17). In other words, the pro-peptide may function not only by itself but also through interaction with mature BDNF. Furthermore, pro-peptide and proBDNF may functionally compete with each other, but the existence of such a regulatory mechanism and its biological significance remain enigmatic.

One of the single nucleotide polymorphisms (SNPs) in the human BDNF gene, rs6265 (Val66Met), discussed in the article by Umemori, has attracted considerable interest because of its high frequency and its phenotype in higher brain functions, namely, impaired performance of episodic memory18). SZ and bipolar disorders (BP) are both known to have extremely high heritability (80%), and the association between these psychiatric disorders and genetic variants of BDNF and its encoded molecules have been actively studied. However, most of these studies were carried out in populations consisting of a single or a small number of ethnic or racial groups, and the sample sizes were limited.

The international consortium Psychiatric Genomics Consortium (PGC) is conducting a worldwide meta-analysis of genome-wide association studies (GWAS) for psychiatric disorders, including SZ and BP19), and their sample size is huge, reaching hundreds of thousands in the SNP meta-analysis. In the GWAS of SNPs, a p-value of less than 5.0 × 10-8 is considered a genome-wide significance level, but no loci in the BDNF or its receptor gene region met this significance level. As an example, the p-value of the correlation between the rs6265 (Val66Met) SNP and SZ was reported to be 7.95 × 10-5, which does not meet the genome-wide significance level, and the odds ratio was 1.052, indicating a difference of only 5%20, 21). Although there are more than 100 risk loci for SZ that meet genome-wide significance levels, their effect sizes are generally small, and it has revealed that SNP that can be used for diagnosis likely do not exist22). In these psychiatric disorders, with few exceptions, the pathophysiology is thought to be formed by the combined effects of a large number of factors. There is, on the other hand, the possibility that BDNF signaling is functionally involved in those disorders at the biochemical and physiological levels. It is also possible that the phenotype of mice transfected with genetic variants of BDNF or related molecules may share some of the pathophysiological features observed in human patients.

Drug discovery on BDNF and its related molecules

As described, BDNF is a molecule with a wide range of critical functions in various cells and tissues, and has been shown to be involved in the pathogenesis of a variety of diseases, including psychiatric disorders. Therefore, BDNF and its related molecules have attracted attention as candidate molecules for therapeutic targets and diagnostic biomarkers.

As explained in the article by Adachi, BDNF/TrkB signaling can be responsible for the oncogenic transformation of cells and promotion of cancer cell invasion and metastasis. NTRK fusion genes, which have been found in various cancers, are aberrant genes in which the gene for Trk, a receptor for neurotrophic factor (NTRK), is fused to a completely different gene (ETV6, LMNA, TPM3, etc.) by chromosomal translocation23). The NTRK fusion protein is thought to promote cancer cell proliferation via its downstream signaling, and, therefore, specific inhibitors against tyrosine kinase activity of the fusion protein have been developed as cancer drugs that can inhibit the growth of tumors expressing these fusion proteins23). Roche's entrectinib (Rozlytrek) and Bayer's larotrectinib (Vitrakvi) have already been marketed and used for treatment24, 25).

Clinical studies focusing on BDNF in psychiatric and neurological disorders are currently being conducted in Europe, US, China, and other countries around the world. As in the case of AMPAkine, which directly targets the AMPA-type glutamate receptor (described in the article by Adachi), there have been attempts to develop drugs that indirectly increase the amount of BDNF protein by stimulating other molecules (Org 24448, an AMPAkine, has been withdrawn from clinical trials due to adverse events (NCT00113022)). There are also many attempts to use serum BDNF levels as a read-out to measure the effects of drugs (e.g. antidepressants), exercise, nutrition, and other stimuli, and to evaluate the sensitivity of genetic variants of the BDNF gene, including the rs6265 (Val66Met) SNP, to various therapeutic effects.

Attempts to directly manipulate BDNF have just been initiated. A research group in the US has been conducting a P1 clinical trial (NCT05040217) on gene therapy for treating early Alzheimer's disease (eAD) and mild cognitive impairment (MCI). This is an ambitious attempt to halt the progression of eAD and MCI by BDNF, and it aspires to suppress neuronal cell death and to promote synaptic reorganization. In these trials, the BDNF gene is introduced into the entorhinal cortex and hippocampus of patients' brains using adeno-associated virus (AAV) vectors.

As noted in the introduction, there is a declining trend in the number of articles on BDNF published in top journals. However, the total number of BDNF-related papers published per year has consistently increased (391 papers in 2001 → 1,365 papers in 2011 → 2,512 papers in 2021). This may reflect the situation where BDNF's biological functions and its mechanisms, which are now reasonably well understood, have been evaluated and applied in various systems. However, many mysteries still remain in fundamental areas, such as the molecular dynamics of pro-peptide, biological functions of peripheral BDNF, the molecular machinery for the regulatory/constitutive secretion of BDNF, and so on.

In clinical research on psychiatric and neurological disorders, the attempts to indirectly induce BDNF expression currently form the major approach, while alternative approaches to directly regulate BDNF have only just begun. One of the major reasons for this is that BDNF has diverse activities in various cells and tissues at various times, making it difficult to restrict BDNF to exert effects that are localized to a target site or timing. The application of powerful new technologies, such as optogenetics, genome editing, and gene-delivery vehicles, that enable precise control in time and space is expected to advance the development of methods to treat and prevent psychiatric and neurological disorders by directly targeting BDNF and its related molecules.

BDNF is, thus, an old yet new molecule. Many mysteries still remain to be explored, but the outcomes of basic research have been and will be linked to clinical research steadily, which is then expected to lead to innovative developments of medical science.

I am grateful for Dr. Johannes Dijkstra, Fujita Health University for his critical reading of the paper. I also would like to express my sincere gratitude to the late Professor Hiroshi Hatanaka of Osaka University for his great contribution to the neurotrophin research in Japan26, 27).