Proteins responsible for vital cellular functions use kinase-induced phosphorylation and phosphatase-induced dephosphorylation for their activation and deactivation, respectively. Wide varieties of diseases are caused by dysregulation of kinase and phosphatase activity. Various kinase abnormalities have been reported in cancer and neurodegenerative disorders. Therefore, the analysis of protein phosphorylation is a critical area of research that can lead to the identification of the cause for various diseases and can aid in the development of kinase inhibitors (molecular-targeted agents).

To date, we have developed techniques for protein phosphorylation analysis using Phos-tag, a functional molecule that specifically captures a phosphate group (-PO32-). This article introduces three Phos-tag-based techniques that are used by life science researchers. 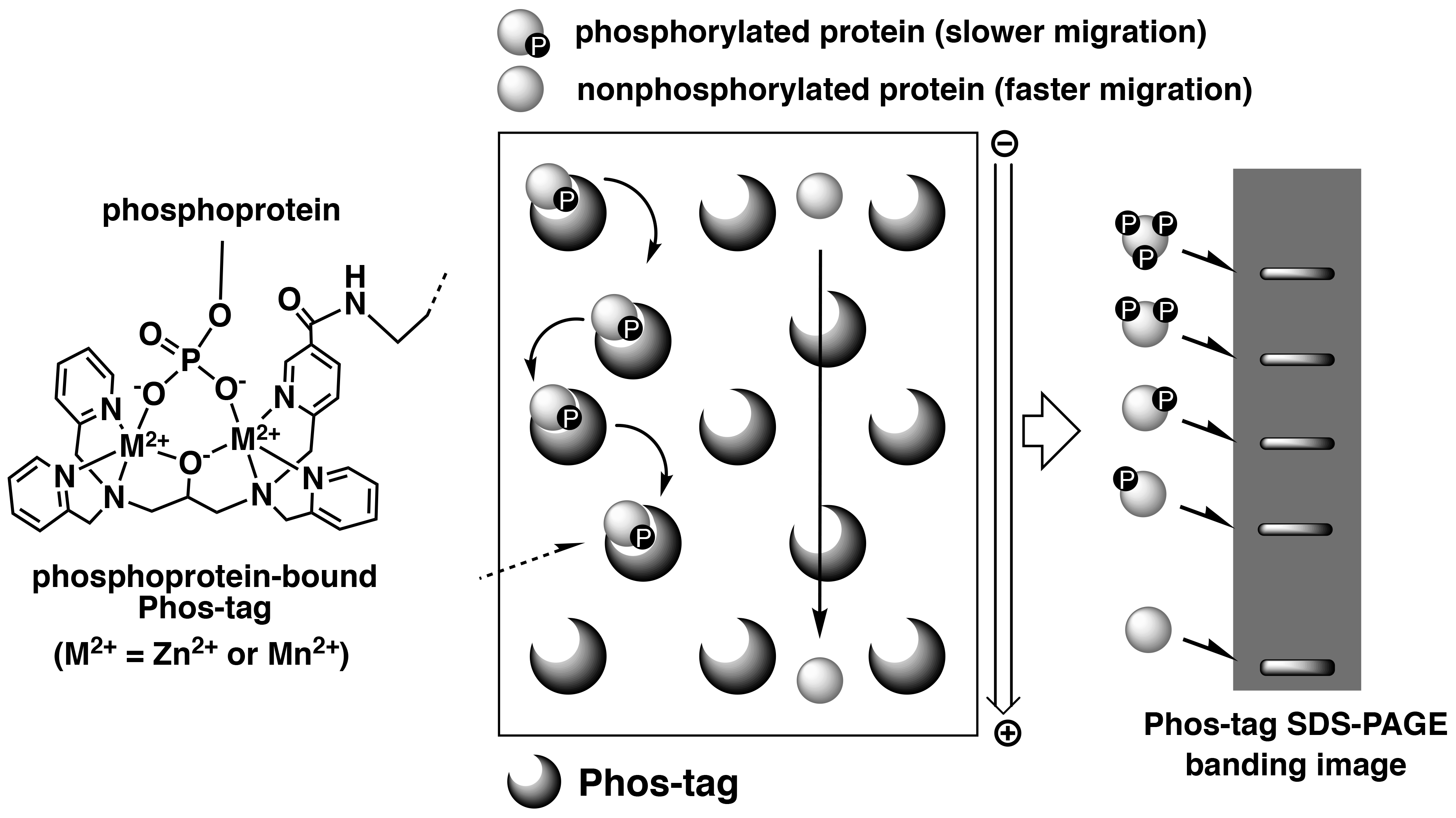 Recently, we analyzed different phosphorylated forms of MEK1 in cancer using Phos-tag SDS-PAGE.5) Characteristic mutations of the MEK1-coding gene have been identified in certain sporadic cancers and in MEK-inhibitor-resistant cancer cells. Phos-tag SDS-PAGE revealed that the introduction of mutations can produce constitutively active MEK1 species containing phosphorylated Ser-218 and Ser-222 residues (Figure 2) and induces constitutive activity of the kinase. Phos-tag-based phosphorylation profiling of MEK1 can therefore provide clinical insights into the characteristics of individual mutations in the MEK1-coding gene. 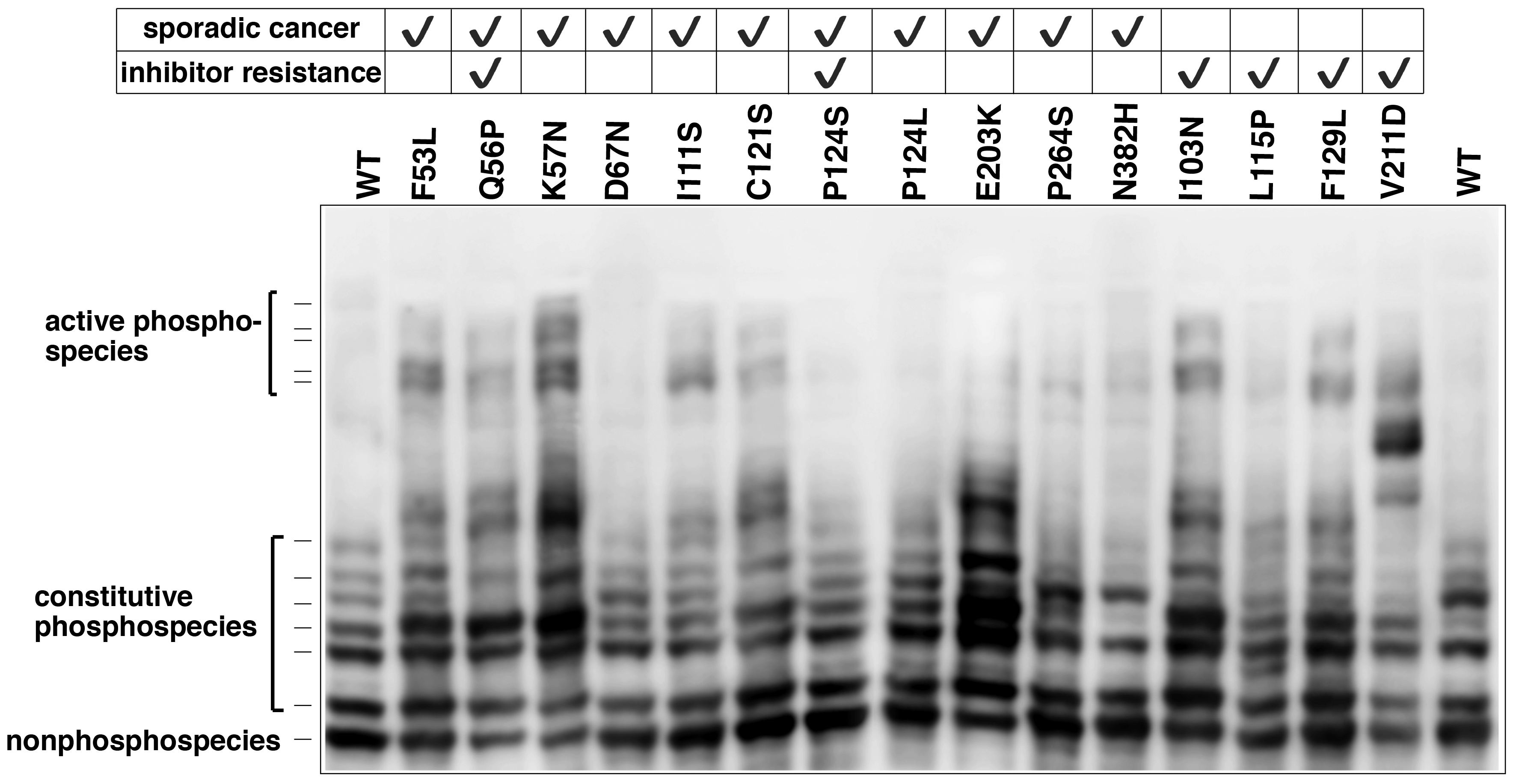 Phos-tag Biotin can be used as a molecular tool in applications such as western blotting or microarray-based methods for comprehensive detection of phosphorylated proteins. In this technique, a complex is formed between Phos-tag Biotin and a horseradish peroxidase (HRP)-bound streptavidin tetramer in a 4:1 ratio, followed by probing of the blot membrane or microarray. Phosphorylated proteins that are specifically bound to Phos-tag Biotin are detected by the reaction between the chemiluminescence (ECL) substrate and HRP as enhanced ECL signals (Figure 3).1) 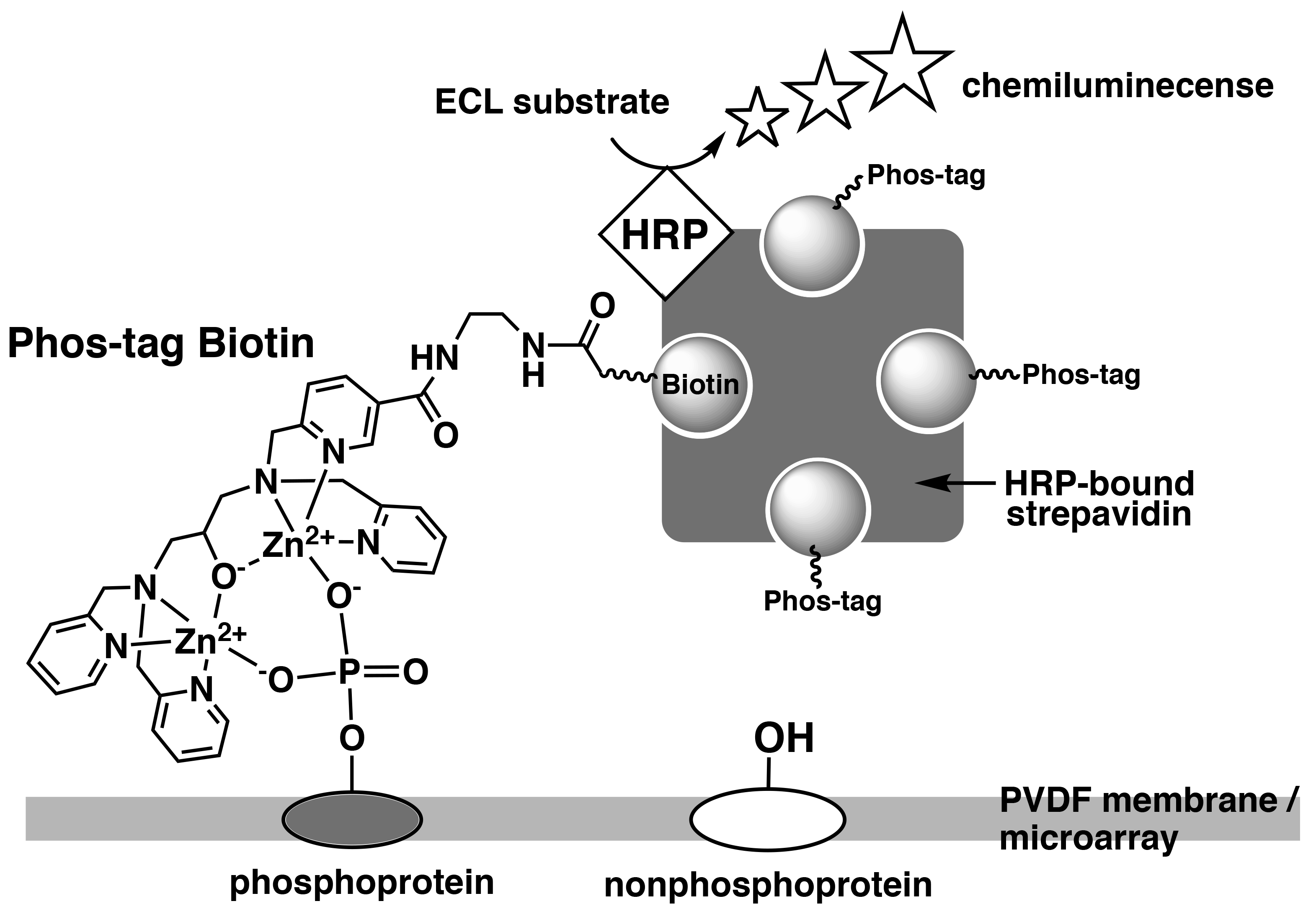 To analyze phosphorylated proteins using Phos-tag Biotin in conjunction with the ECL system, we used a commercially available antibody microarray Proteome Profiler (Human Phospho-MAPK Array, R&D Systems). 5) This microarray consists of 52 individual phosphorylation-independent capture antibodies spotted in duplicate on a nitrocellulose membrane. We examined the phosphorylated proteins present in two lysate samples of Raw 264.7 cells before and after treatment with lipopolysaccharide (LPS) and phorbol 12-myristate 13-acetate (PMA) (Figure 4). In agreement with the results of several other studies on LPS/PMA signaling, we confirmed the significant increase in the levels of phosphorylation of several proteins, including Akt2, HSP27, and p38b, using the antibody microarray system with Phos-tag Biotin. This technique allows simultaneous detection of the phosphorylation status of multiple proteins in a lysate sample.

Phos-tag Agarose can be used as a matrix for phosphate-affinity chromatography. Although over 60% of all cellular proteins can be phosphorylated, they dynamically change between phosphorylation and dephosphorylation states using kinase and phosphatase reactions, respectively. In fact, the number of proteins in the phosphorylated state is very small. Therefore, the technique of separation and enrichment is very attractive and useful for the analysis of such phosphorylated proteins.7) 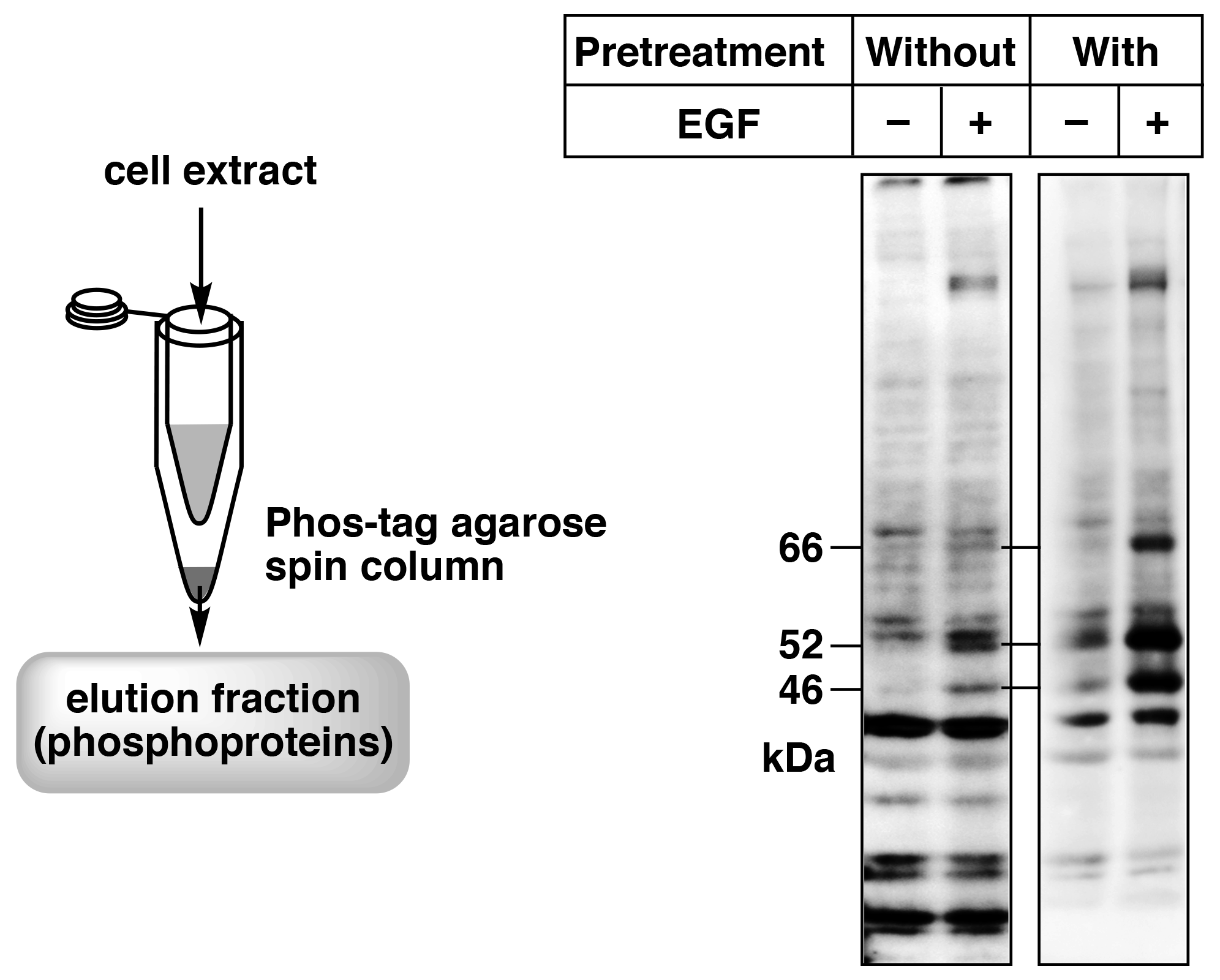 Phos-tag Agarose is also useful for the separation and enrichment of phosphopeptides from peptides mixtures in phosphoproteomics using mass spectrometry.9)

The number of research papers citing the use of Phos-tag was approximately 500 in 2018 (based on Google Scholar results), indicating that Phos-tag is gaining interest as a standard tool for the analysis of protein phosphorylation. It is noteworthy that Phos-tag-based techniques are used not only for the analysis of phosphoproteins in general life science research, but also for the analysis of bacterial or plant phosphoproteins that have been reported in relatively few studies. Furthermore, these techniques can be applied to analyze proteins for which antibodies are not commercially available as well as to proteins for which the phosphorylation status is unknown. We hope that more researchers use Phos-tag-based techniques that contribute to diverse areas of life science.