We will introduce a wide range of topics of research, technical reports, tips on experiments and so on.

This article was written by Mr. Kenji Konishi, AiSTI SCIENCE Co., Ltd., Technical & Marketing Group, for Vol. 15 (February 2021), of ChemGrowing.
The content of this article is from the time of publication. It is not the latest information due to new knowledge and changes in regulatory rules after original publication.

The outline of STQ-LC method is shown in Figure 1.

The STQ method is a "rapid, simple and highly purified" analytical method that takes into account the total balance from homogenization of samples to analysis.

The sample is prepared by pre-freezing and cryogenic milling with dry ice. It is then homogenized and extracted (using acetonitrile, salting-out and liquid-liquid partition) according to the QuEChERS method, the sample is then purified using a solid phase cartridge Smart-SPE with a small filling amount of several tens of mg.

The STQ-LC method is a purification method that targets relatively high-polar compounds measured by LC-MS/MS. In the basic flow, the sample (extract) is loaded to connected C18 and PSA to eliminate non-polar and low-polar impurities with C18 and longer chain fatty acids and ionic impurities with PSA. Since acidic pesticides having a carboxyl group (-COOH) are adsorbed to PSA, these compounds are eluted by passing acetonitrile acidified with formic acid.

Then, water is added to the effluent from C18 and PSA to lower the solvent ratio, and the solution is passed again through another C18 to remove low polarity impurities that were not completely removed by the first C18. The burden on the analytical column (ODS) can be reduced by removing non- and low-polar impurities in this way (Figure 2). Sufficient purification can prevent degradation of analytical columns, maintain peak shapes, and shorten the column washing time. In this experiment, we demonstrate how to optimize neonicotinoid pesticide analysis using this method. 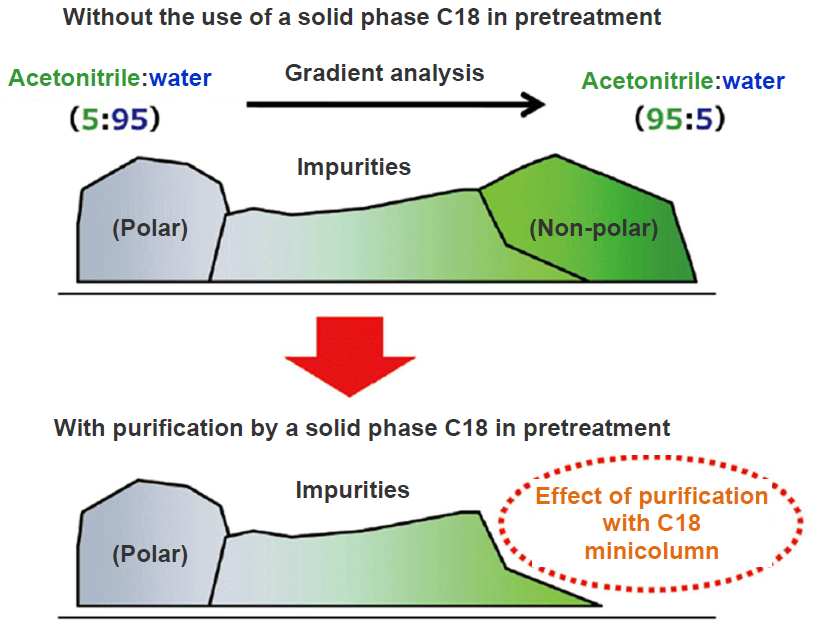 Homogenization of samples is important for maintaining analytical precision. The pre-freezing and cryogenic milling with dry ice preparation method used in the STQ protocol homogenizes a sample to a powder by grinding the sample, which has been pre-frozen on dry ice, together with dry ice. Not only vegetables such as spinach but also grains and beans such as brown rice and soybeans were ground more finely than milling at room temperature and homogenized (Figure 4). As grinding in frozen state also suppresses enzyme activities, it is also useful for grinding samples producing allyl compounds by enzyme activities. In the present recovery test, spinach, brown rice and soybeans were ground by the pre-freezing and cryogenic milling with dry ice method using a large volume freeze crusher (Figure 5). Tea was pulverized by a mill and homogenized. 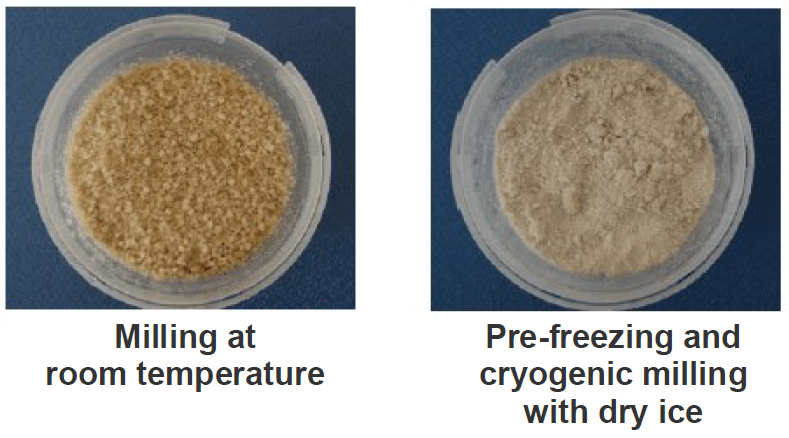 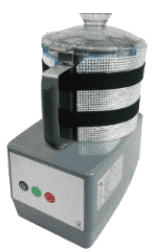 The extraction flow is shown in Figure 6. 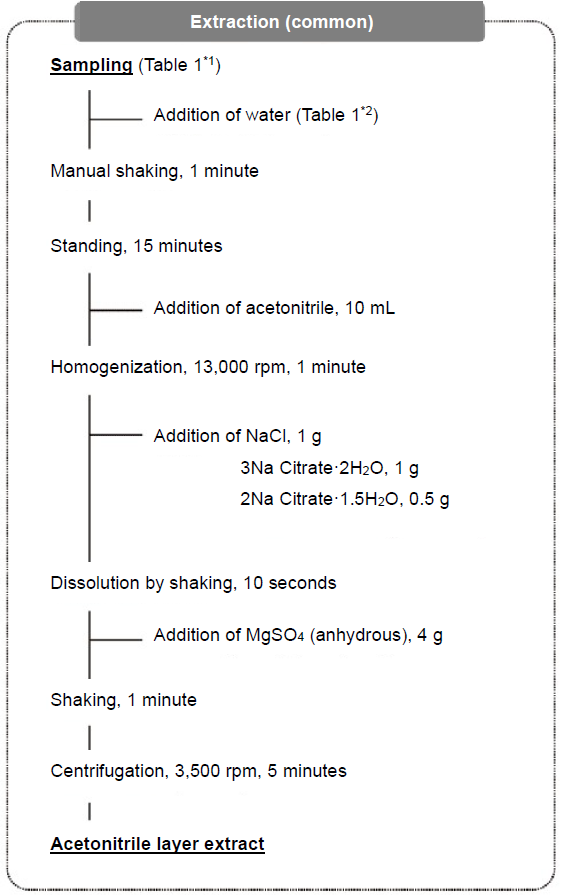 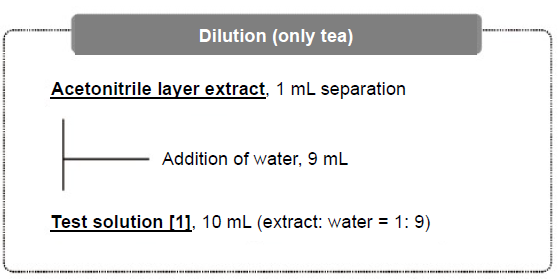 The samples were weighed according to the description as shown in Table 1, and the mixture standard solution was added to make honey, brown rice, soybeans and spinach 0.01 ppm and tea 0.25 ppm in the samples.

Table 1. Amount of Sample and Amount of Water Added

The purification flow is shown in Figure 8. 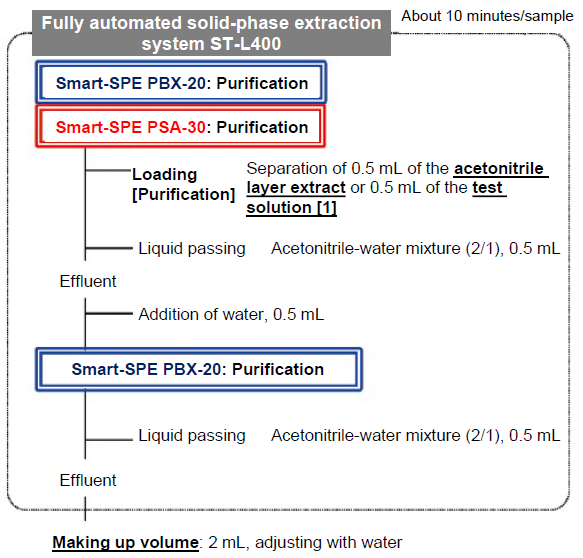 Non-polar and low-polar impurities such as pigments and lipids are removed with PBX, which is a polymeric hydrophile-lipophile balance filler. Then, acidic substances such as fatty acids and anionic impurities are removed with PSA. By adding water to the effluent from the connected column, the ratio of acetonitrile is reduced and low-polar impurities that were not completely removed with the above PBX are eliminated. As neonicotinoid pesticides to be analyzed are not retained in the solid phase, the effluent is received in a test tube. Target components are eluted completely by passing the acetonitrile-water mixture (2/1) through the lower PBX. The effluent is received in the same test tube, made up the volume with water and is used as the measurement solution.

When C18 adopted in the STQ-LC method is used, CPMF, one of the target components, is adsorbed requiring an acidic solvent for elution. However, with PBX, CPMF is not adsorbed and, thus, a neutral solvent can be used. As the STQ method targets a wide range of pesticide components, an acidic solvent is used to elute acidic pesticides that are adsorbed to PSA, but this results in elution of some ionic impurities. Since all of the neonicotinoid pesticides subject to analysis this time are not retained in PSA, the liquid passing after loading can recover the target components without eluting anionic impurities adsorbed to PSA by using a neutral acetonitrile-water mixture. 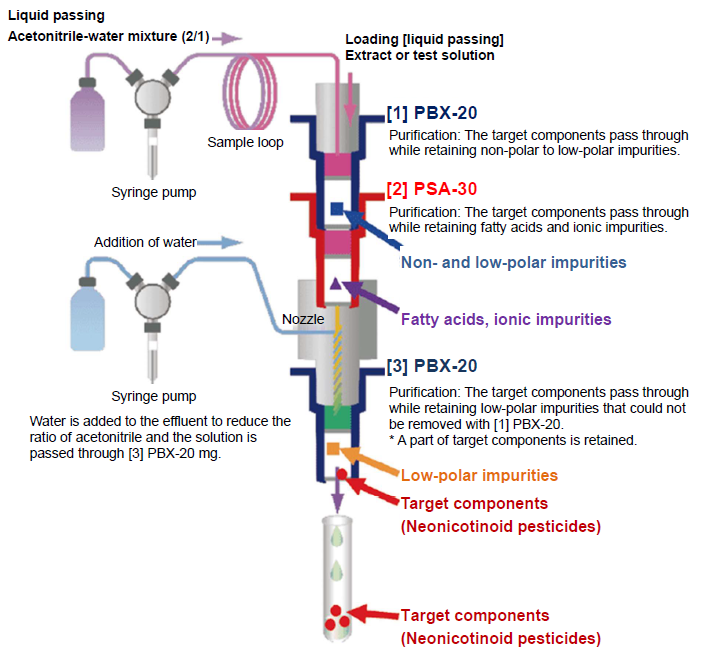 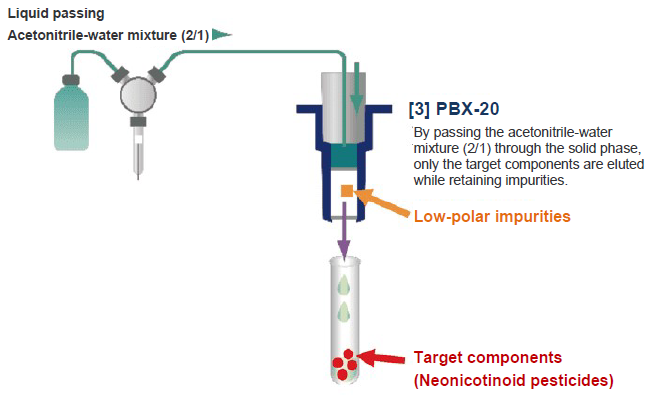 0.5 mL of the extract (test solution in the case of tea) obtained in section 3-4 was loaded to the connection port between PBX-20 (upper) and PSA-30, and 0.5 mL of acetonitrile-water mixture (2/1) was passed through the column. To the effluents from PBX-20 (upper) and PSA-30, 0.5 mL of purified water was added and passed through PBX-20 (lower). Then, 0.5 mL of an acetonitrile-water mixture (2/1) was passed to elute the target components from PBX-20. The effluents were all received in a test tube and purified water was added to make a total volume of 2 mL.

The samples obtained were measured by LC-MS/MS. The measurement conditions are shown in Table 2. The peak shape of CPMF was improved by adding formic acid to the mobile phase and making it acidic (Figure 10). Gradient analysis using the mobile phase with the composition of B Conc. 5% at the start of measurement (at the time of sample injection) provided favorable peak shapes in all components (Figure 11). 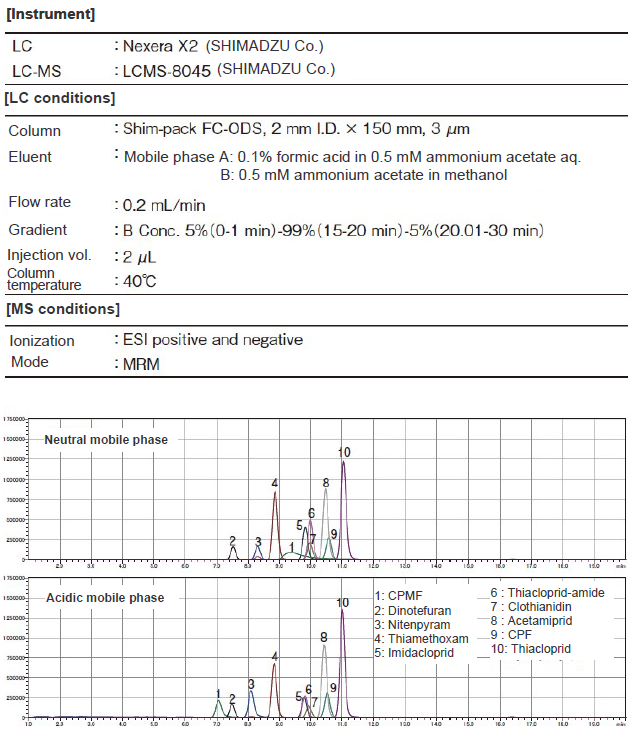 Except for imidacloprid in spinach and clothianidin in tea, good results were obtained with recovery rate of 70% to 120% and repeatability within 10%.

For spinach, the recovery rates were not evaluated accurately because imidacloprid was detected exceeding the concentration added from the analytical sample. Because clothianidin was susceptible to the influence of ionization inhibition regardless of the sample, the measurement was performed in both the positive and negative measurement modes and good recovery rates were obtained in either mode with the samples other than tea. However, the recovery rates were low in both modes with tea. For the components other than clothianidin in tea, the extract was diluted 10 times and purified by solid phase extraction and thereby catechins were removed and ionization inhibition was reduced (Figure 12).

In this pretreatment, a good recovery rate was also obtained for CPMF by changing C18 in the basic flow to PBX. For liquid passing, an acetonitrile-water mixture (2/1) was used to suppress the elution of non-polar and low-polar impurities and elute only the target components.

The peak shapes of CPMF and dinotefuran were improved by using an acidic mobile phase for the separation of 10 neonicotinoid pesticides by LC and making the mobile phase composition as B Conc. 5% at the start of analysis.

In addition, in the optimization from STQ-LC method to neonicotinoid pesticide analysis, it was possible to improve the recovery rate and purification effect by changing C18 adopted in the basic flow to PBX, using an acetonitrile-water mixture (2/1) as the passing liquid, and diluting the extract with water in the case of tea. As a result, good recovery rates and reproducibility were obtained. In this study, we proposed pretreatment methods for neonicotinoid pesticides, and demonstrated that they could be analyzed quickly, easily, and in highly purified manner for the respective samples.