Marine toxins are natural poisons possessed by fish and shellfish and cause food poisoning. Marine toxins are not only found in fish and shellfish, but also in microalgae or marine algae such as marine microorganisms and plankton, which are bio-concentrated by the food chain and cause poisoning in humans who eat them. In Japan, food poisoning, mainly caused by pufferfish poison (tetrodotoxin) or bivalve shellfish (oysters, scallops, etc.), occurs every year and those toxins are regulated and controlled by the Food Sanitation Act. Furthermore, global climatic changes have been accompanied by changes in the distribution of marine poisons, and the areas where food poisoning occurs are also changing. Therefore research on various marine toxins is in progress.
We provide a variety of reagents and kits related to marine toxins, including okadaic acid, paritoxin, and ciguatoxin.

Ciguatera food poisoning is the world's largest marine poisoning with over 50,000 people poisoning per year. It is a very strong neurotoxin, and the causative agent is ciguatoxins, which are produced by toxic dinoflagellates. There are numerous analogues of ciguatoxins (CTX). We provide the totally synthesized CTX 1B, CTX 3C, and CTX-ELISA 1B which is high sensitive ELISA kit to detect CTX 1B.

Mitotoxin (MTX) is produced by dinoflagellate (Gambierdiscus toxicus). It is named mitotoxin after the Tahitian name of Striated surgeonfish "maito", which is a cause of ciguatera poisoning. MTX is the largest natural organic compound, which known structural formula. Since MTX exhibits a specific intracellular uptake of extracellular Ca2+, it has attracted attention for the mechanism of signal transduction mediated by Ca2+.

Palytoxin is a toxin isolated from Palythoa tuberculosa. Palytoxin is the most toxic after maitotoxin among non-peptide compounds. Mainly, it causes strong coronary artery contraction. In addition, it has been reported to cause hemolysis, peripheral vasoconstriction, increased Na+ permeability in the nerve membrane, histamine release, and Na+, K+ -ATPase inhibition at high concentrations. 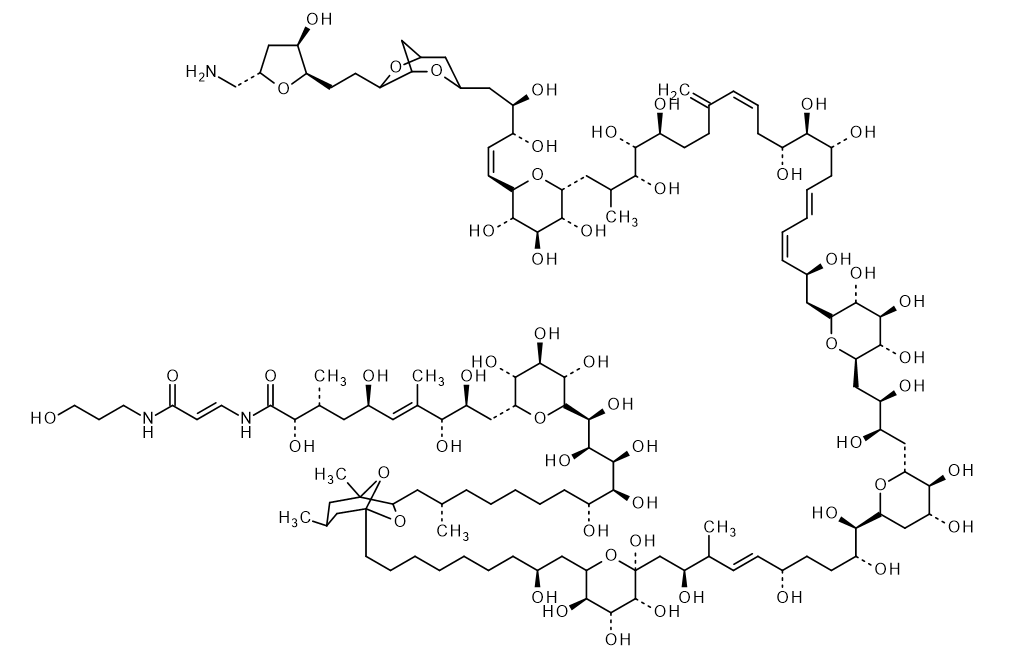 Okadaic acid is the causative agent of Diarrheic Shellfish Poison isolated from the chlorisokamene. Physiological activities have been reported, including non-TPA type-promoter activity, smooth muscle contraction in a calcium-depleting solution, and phosphorylation of proteins by specific inhibition of protein phosphatases.

It is an alkaloid derived from Halichondria (Halichondria) okadai.1) It shows VCAM-1 production inhibitory action.2) It is also reported to inhibit L-type Ca2+ channel in vascular smooth muscle cells,4) which decreases monocyte adhesion to the endothelium through inhibition of NF-κB activation.3)

VCAM-1 is a cell adhesion molecule that is expressed on vascular endothelial cells by strong stimulation such as IL-4, TNF and strongly adheres to leukocytes. It is thought to be deeply involved in inflammation, cancer, transplant organ rejection reactions and etc. Halichloline has a possibility to be a lead compound of anti-inflammatory, anti-cancer and immunosuppression. 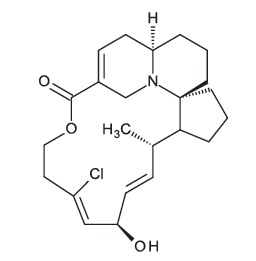