This article was written by Ms. Kimiko Toshida, FUJIFILM Wako Pure Chemical Corporation, for Vol. 71, No. 1 (January 2003) of Wako Junyaku Jiho.
The content of this article is from the time of publication. It is not the latest information due to new knowledge and changes in regulatory rules after original publication.

Residual drugs in food, especially in imported food, have become a social problem, and food tests have been performed by various measurement methods. Honey, royal jelly, propolis, etc. have been inspected for residual drugs in Japan at the time of import. Oka et al. have previously reported an analytical method for tetracycline antibiotics in honey which is performed by HPLC using a solid-phase extraction columns (ODS silica gel and cation (-COOH) exchange resin) for pretreatment1). In this study, using this method as a reference, we examined a method to pretreat tetracycline antibiotics (tetracyclines: TC, oxytetracycline: OTC, chlortetracycline: CTC) and chloramphenicol: CP at the same time and to measure them by HPLC.

Using 10 g of a honey sample, Presep®-RPP (FUJIFILM Wako) and SPE Column COOH (J.T.Baker) as a solid-phase extraction column and Wakopak® Navi C18-5, 4.6 mm × 150 mm (FUJIFILM Wako) as an analytical column, the solid-phase extraction conditions and HPLC analytical conditions were examined. As a result, it became possible to detect 0.05 ppm of each antibiotic in honey. The solid phase extraction method is shown in Figure 1, and examples of HPLC analysis and analysis conditions of TC, OTC, CTC, and CP are shown in Figures 2 and 3. The recovery rate after addition of the analytical standard to honey is shown in Table 1. 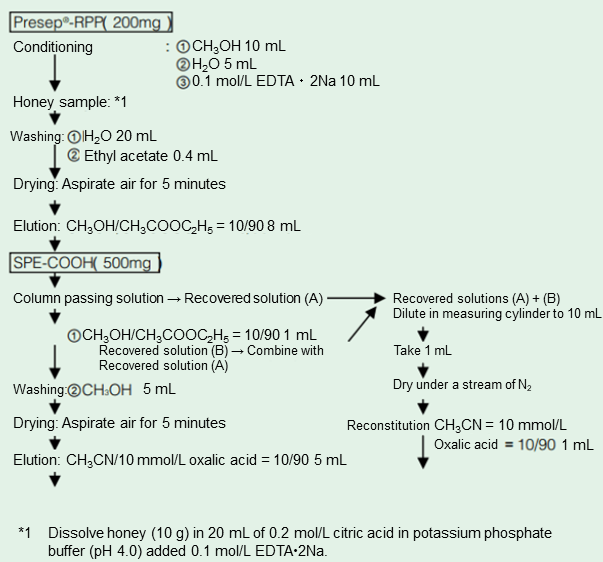 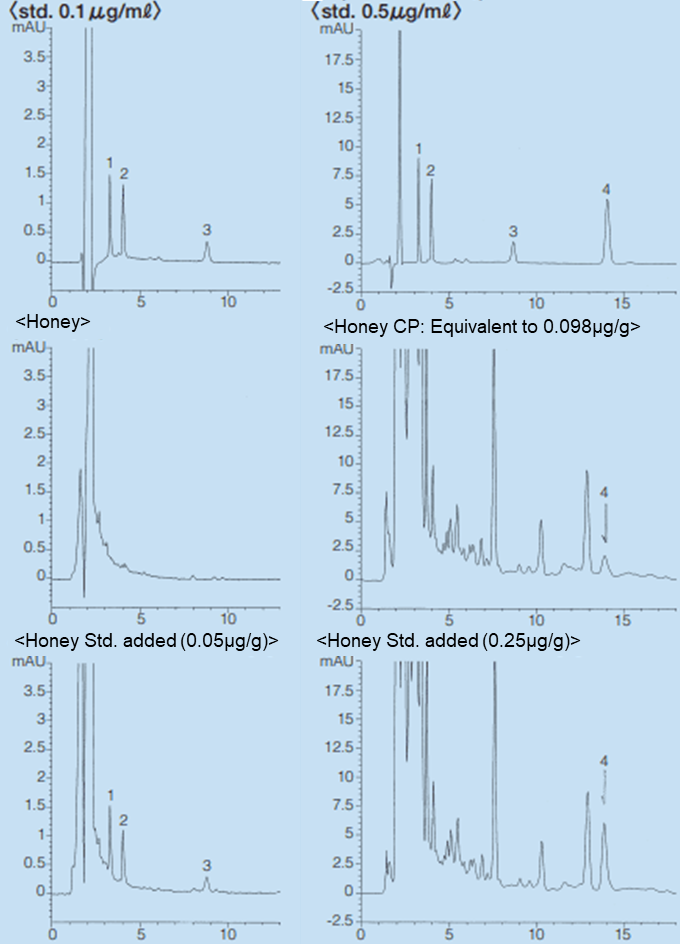 Table1. Recovery rate of analytical standard after addition to Honey

Presep®-RPP is a column packed with hydrophilic polymer that shows reverse-phase retention behavior similarly to ODS, but it was highly effective in selectively resolving and removing highly polar impurities, and it was possible to elute TCs and CP with the minimum amount of eluate compared to ODS silica gel columns.

Subsequent SPE-COOH column processing was effective in retaining TC, OTC, and CTC, and letting CP pass by, and worked effectively in resolving them and removing impurities. When the analytical standard was added to honey, the recovery rate was good with 85.6 to 96.4% for TCs and 77.9 to 80.5% for CP, and the calibration curve showed good linearity in the injection range of 1 to 500 ng.

We introduced a simple analytical method for residual antibiotics in honey using Presep®-RPP, SPE-COOH (500 mg) and Wakopak® Navi C18-5 4.6 × 150 mm. The use of Presep®-RPP was effective in reducing the amount of eluate, and CP can be eluted with CH3OH/CH3COOC2H5 = 10/90 and thus easily concentrated. This method was therefore considered to be adapted for highly sensitive analysis.

We hope that this analysis method will be useful as a reference in simplifying the analysis of residual antibiotics in honey.