This article was written by Mr. Tomonori Asai, AiSTI SCIENCE Co., Ltd., Technical & Marketing Group, for Vol. 18 (November 2021), of ChemGrowing.
The content of this article is from the time of publication. It is not the latest information due to new knowledge and changes in regulatory rules after original publication.

When an accidental release of environmental contaminants to river water occurs, analytical results outlining the type and concentration of the contaminants are required immediately. Moreover, the development of more rapid analytical methods allows for more samples to be processed in a shorter period of time.

This report presents the results of the recovery test of pesticides in river water performed by the fully automatic and rapid "Online SPE-FastGC/MS/MS system." By combining a device "SPL-P100" that enables fully automatic online analysis from solid-phase extraction to GC/MS/MS measurement with a "20 m column" and "FastGC/MS/MS system" that enables rapid separation measurement.

The outline of Online SPE-FastGC/MS/MS system is shown in Figure 1.

The online SPE-GC-dedicated solid-phase cartridge "Flash-SPE" and Large volume injector device for GC "LVI-S250" can be automated to work with this system.

Online SPE-GC-dedicated solid-phase cartridge "Flash-SPE" and its structure are shown in Figure 3. This solid-phase cartridge has a compact design with a very small filling amount of 2 to 5 mg, which enables the scale-down of the analytical system thereby reducing the sample load. The target compound can be eluted from the solid-phase with several tens of μL of solvent.

On the other hand, the Large volume injector device for GC "LVI-S250" uses spiral insert which is so-called "stomach shaped insert", and based on its shape, it is possible to inject up to 100 μL (Figure 4). By this method, the entire volume of several tens μL of the eluate eluted from the Flash-SPE can be injected into the GC. 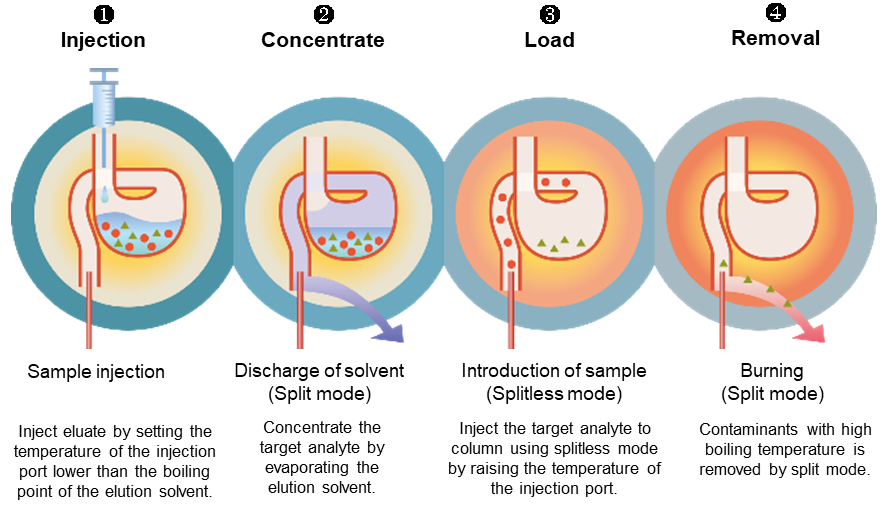 In this example, GC/MS/MS capable of rapid ion intake "JMS-TQ4000GC (JEOL, Ltd.)" was connected to this system, and a short analysis column of 20 m was used for automation as Online SPE-FastGC/MS/MS system and further acceleration of analysis.

Comparison of the analysis of pesticides in water between Online SPE-FastGC/MS/MS system and the conventional method is shown in Figure 6. In the conventional method, load 500 mL of the sample on the solid-phase (500 mg) to hold the target compound, dry the solid-phase by suction and perform elution. After that, concentrate the solution to 1 mL, and inject 1 μL of the concentrate into GC. In this system, on the other hand, because Flash-SPE is used for solid-phase extraction, scale-down of sample collection is possible from 500 mL to 0.5 mL, and, as a result, the volume of eluate from the solid phase is as small as several tens of μL (40 μL in this report). Therefore, the entire volume can be injected into GC using LVI-S250. 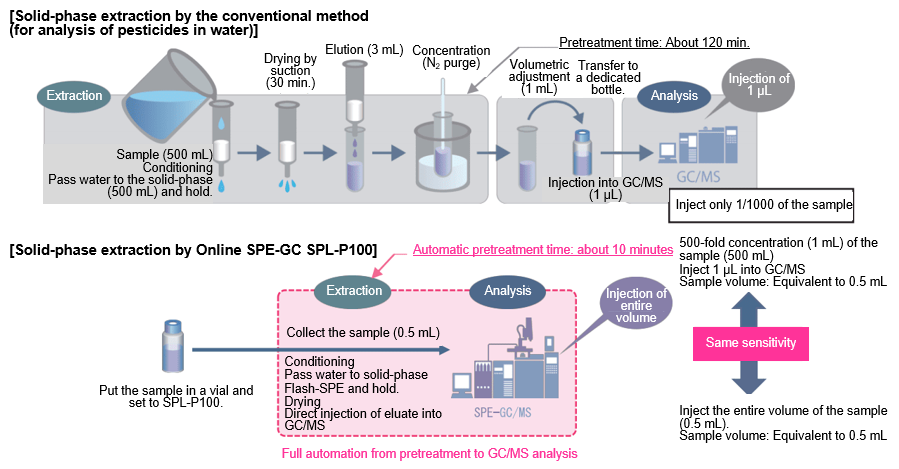 Figure 6. Comparison of the analysis of pesticide in water between
Online SPE-FastGC/MS/MS system and the conventional method

The flow of sample preparation is shown in Figure 7. To the sample, MeOH was added to make the volume ratio 10%, and sodium ascorbate was added to make the concentration in the sample solution 100 ppm. MeOH is used to suppress adsorption of the low-polarity compound to glass vials, sodium ascorbate is used to prevent oxidation of the target compound. The standard solution was subsequently added in the recovery test. The prepared sample was dispensed in a 1.5 mL glass vial and set to SPL-P100. 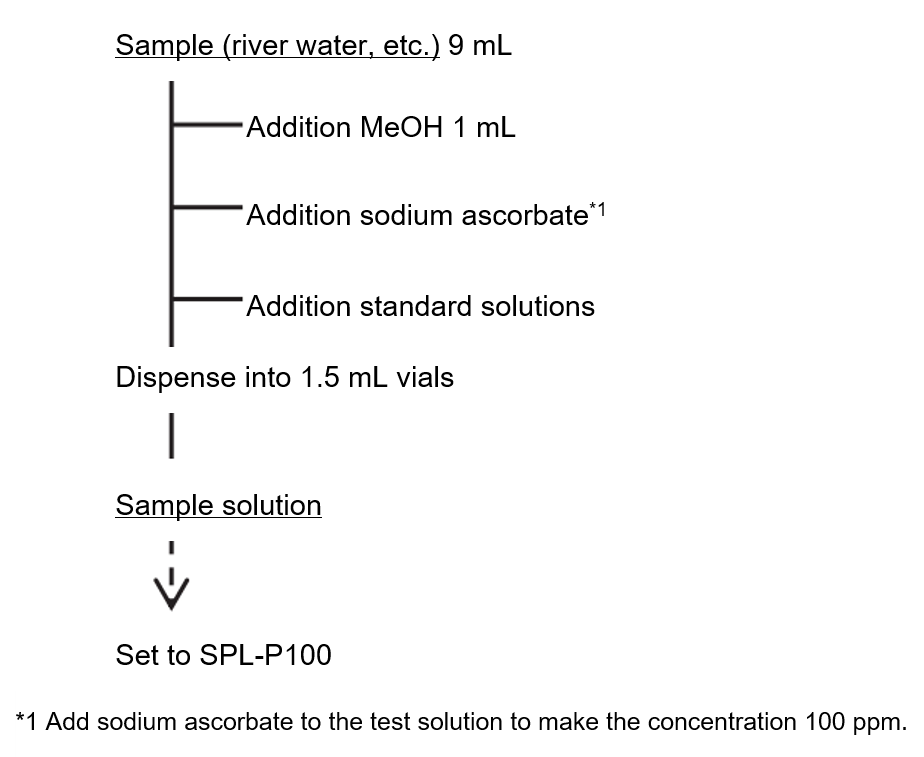 The analytical standard for calibration curve was prepared in the same manner using purified water. 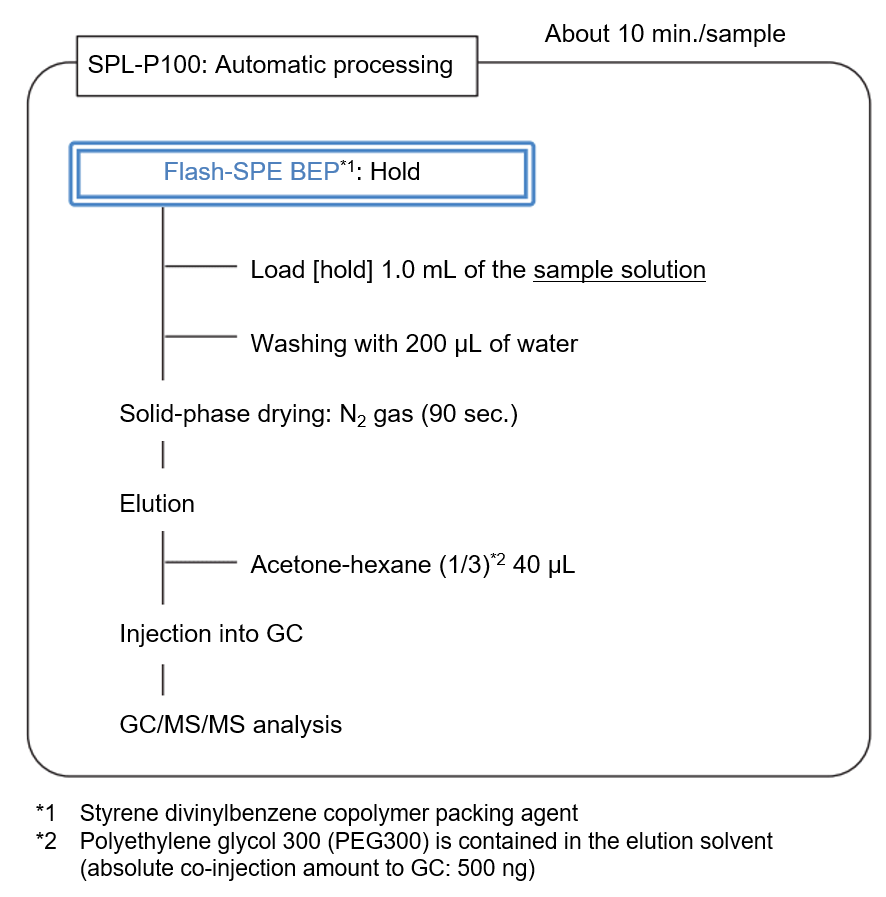 1.0 mL of the sample solution was loaded on BEP to hold the target compounds. Then, the BEP was washed with 200 μL of water to remove highly polar contaminants. Subsequently, BEP was dried by blowing nitrogen gas. It was eluted with 40 μL of acetone-hexane (1/3), and the entire volume was injected into GC. The acetone-hexane eluate (1/3) was prepared to contain polyethylene glycol 300 to make the absolute injection volume into GC 500 ng. This is to inhibit adsorption of the target compound to the active point (adsorption point) existing in the GC insert, column, ion source, etc.

The total volume of the eluate from the solid-phase was injected into GC and measured by GC/MS/MS. In this system, a high speed separation measurement was performed using a 20 m column. The measurement conditions are shown in Table 1, and the measuring equipment is shown in Figure 9. 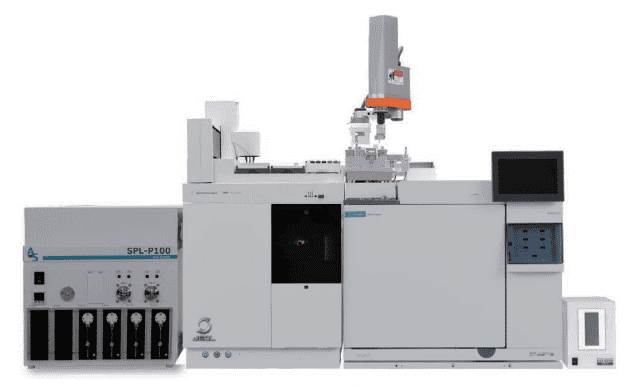 Product images are posted with permission from JEOL, Ltd.

By using a 20 m column, the peak of the target pesticide was detected within 15 minutes, and 1 analysis including the burning out time could be performed in 18.4 minutes (Figure 10). 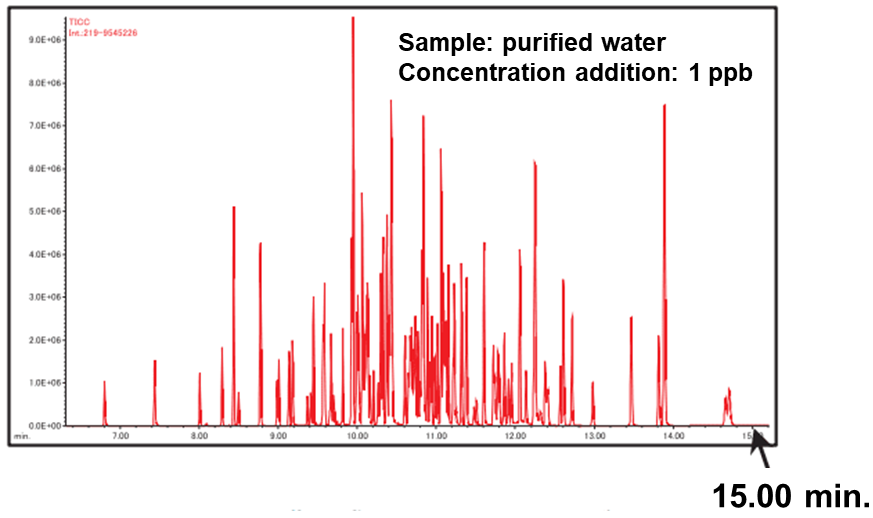 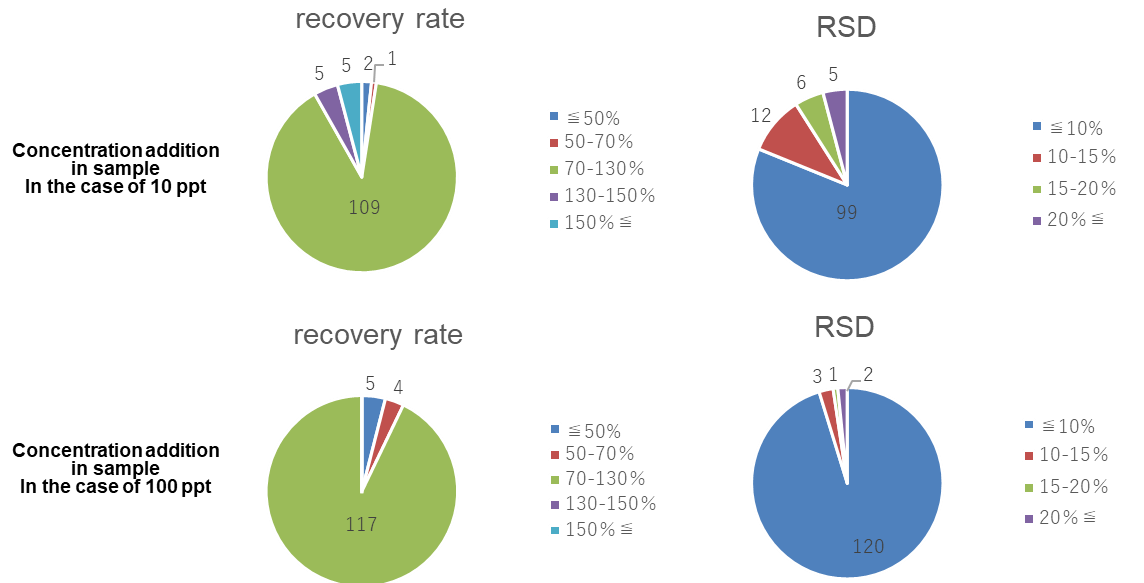 The combination of online SPE-GC SPL-P100 and FastGC/MS/MS enabled more simple, rapid and precise analysis of pesticides in water. Since this system can process multiple samples efficiently in a short period of time, its usefulness was suggested also for monitoring in rivers and emergency cases such as spillage accident of contaminants.