C-peptide is produced simultaneously to insulin. They are included in the insulin precursor - proinsulin. In proinsulin, C-peptide is located as if connecting insulin A and B chains. So, it is called "c(onnecting) peptide". C-peptide is released into the blood in approximately equimolar to insulin by the processing of proinsulin, a precursor of insulin. By the measurement of C-peptide concentration in the blood, it is possible to know the insulin secretory potency of pancreatic β cells in the case during insulin administration or insulin antibodies existing.
LBIS C-peptide Mouse or Rat is a sandwich ELISA system for quantitative measurement of mouse or Rat C-peptide specimen. This is intended for research use only.

C-peptide is produced simultaneously to insulin. They are included in the insulin precursor - proinsulin. In proinsulin, C-peptide is located as if connecting insulin A and B chains. So, it is called "c(onnecting) peptide".

Secretion and blood levels of C-peptide
C-peptide, after being separated from insulin, is also incorporated into secretory granules and released with insulin. It remains in the blood circulation for considerable longer than insulin though its physiological role is not clear.
So, blood C-peptide assay is used to observe biosynthetic and secretory function for insulin. It is also possible to measure C-peptide in the urine as C-peptide is excreted in urine at high concentration that is closely related to the blood level.
By measuring C-peptide, we can estimate insulin secretion in cases when insulin antibody is present in blood.

Measurement of C-peptide is also useful for the estimation of insulin secretion from cultured islet cells, because very often insulin is added to the culture medium exogenously. In such culture system, it is impossible to measure secreted insulin apart from that added to the culture medium. As C-peptide is produced and secreted in equimolar base to insulin, we can estimate the secreted insulin by measuring C-peptide. Deduction of exogenous insulin from the total insulin would be another way to estimate insulin secretion. But it makes big variation and also influence by the ratio of secreted insulin to exogenous insulin. So, the value would not be trustable.
Our C-peptide assay kit recognize the common amino acid sequence to C-peptide I and II, we can estimate total the amount of C-peptides.

Is there any influence of co-existing proinsulin on C-peptide measurement?

Proinsulin is processed by an enzyme at the position where two basic amino acids (K, R) moieties are present side by side as shown by black arrows in the above figure, yielding equimolar insulin and C-peptide. Most proinsulin was processed while it passes Golgi apparatus to secretory granules, however, some remains without processing and present in secretory granules, and secreted into the blood circulation with insulin and C-peptide.
When we measure insulin or C-peptide in the blood, we have to consider that we also measure the amount proinsulin because the structure of proinsulin includes those of insulin and C-peptide, if we ignore the three-dimensional structure.
We examined this possibility, and got the following results.

These results clearly show that Shibayagi's C-peptide ELISA kits can measure only C-peptides in the presence of proinsulin or insulin in assay samples. 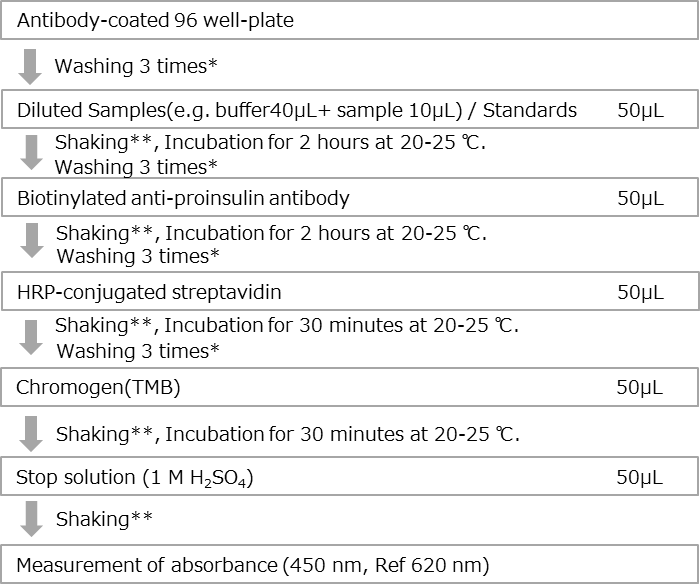