As the NMR spectrum can estimate the molecular structure based on the information such as chemical shift values of signals, coupling, and intramolecular integration ratio, it is used for qualitative analysis, mainly for molecular structure analysis in the fields of organic chemistry and natural products chemistry.
When electromagnetic waves are irradiated on a substance placed in the magnetic field, electromagnetic waves (radio waves) of the frequency specific to the atomic nucleus in the substance are absorbed and released; this is called nuclear magnetic resonance (NMR). NMR spectroscopy (simply called NMR) is a method to record the frequency of electromagnetic waves absorbed per the characteristics of the atomic nucleus as a function of the absorption peak intensity, and its record is NMR spectrum. In real compounds, even if the type of nuclei (1H and 13C) is the same, the frequency at which resonant absorption occurs differs if the surrounding chemical environment is different. This is attributed to the increase or decrease in the strength of the magnetic field caused by shielding the main magnetic field by a small magnetic field of the electrons around the nucleus or adjacent nucleus. Such a difference in resonance frequency is called chemical shift; this difference in frequency is marginal, but information on compounds can be obtained by precisely measuring this marginal difference.
There are two types of NMR: qualitative NMR for molecular structure analysis and quantitative NMR (qNMR) for determining the compound purity by utilizing the characteristics of NMR that the ratio of the number of atomic nuclei in the compound corresponds to the peak area ratio.
We offer solvents, equipment, and reference materials that can be used for qualitative and quantitative NMR analysis. 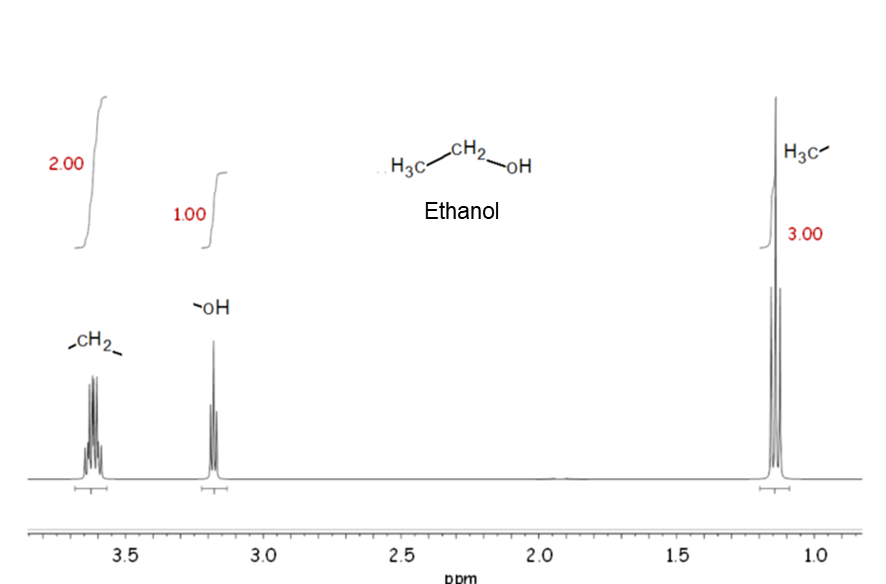 As a result, chemical shift is expressed in the unit of parts per million (ppm).

When nuclei with different chemical environments exist in the vicinity, they interact with each other via the chemical bond axis, resulting in energy-level splitting. This phenomenon is called a spin-spin coupling. The splitting interval is described as a spin-spin coupling constant or J value. Since the coupling nuclei share the same J value, it shows an index to know which nuclei are close to each other.