Brain-derived neurotrophic factor (BDNF), which belongs to the nerve growth factor (NGF) family, is involved in neurogenesis, neuroprotection, synaptogenesis, etc. and is considered as a candidate marker for psychiatric diseases, including depression and autism. Its association has been reported with cardiac disease, diabetes, gout, periodontal disease, stress, exercise, etc. in addition to neurology, which makes it as a target of research in a wide range of areas. The precursor of BDNF is proBDNF, part of which is cleaved to form mature BDNF (mBDNF). proBDNF has been reported to bind to the p75NTR receptor in vivo, showing a different action from that of mBDNF.

BDNF is a molecule that plays an important role in the development and maintenance of nerve function. In recent years, its involvement in various diseases has been reported, leading to growing expectations for its use as a biomarker. proBDNF, the precursor of BDNF, is processed to yield mature BDNF (mBDNF). Since proBDNF and mBDNF show completely different effects, there is a need for a method that can accurately measure mBDNF.

BDNF is a secretory protein, which was isolated from porcine brains by Barde et al. in 1982 as one of neurotrophic factors highly expressed in the brain. BDNF is the second neurotrophic factor identified in the neurotrophin family and is widely distributed in the brain during the development to maturation stage of the nerve system. Its representative known effects include promotion of survival of nerve cells and formation of synapses through a high-affinity receptor, Tropomyosin related kinase B (TrkB).1), 2) As explained above, BDNF is an important factor contributing to the formation and maintenance of nerve function, attracting a lot of attention in neuroscience.

BDNF is expressed as precursor BDNF (proBDNF), transported to the site of secretion, and processed to yield mature BDNF (mBDNF) 6) (Figure 1). It was previously considered that the precursor, proBDNF, had no physiological function, but it has been recently revealed that it has a completely different physiological function from that of mBDNF. mBDNF induces long-term potentiation (LTP) through TrkB to promote neurogenesis and neurodevelopment. On the other hand, proBDNF induces long-term depression (LTD) through a low-affinity receptor, p75NTR, to promote nerve apoptosis7) (Figure 2). This change in the effect due to the difference in processing suggests the presence of a highly complicated control mechanism of BDNF on the nerve system. Therefore, a method to accurately measure mBDNF is necessary to reveal the mechanisms of various psychiatric diseases.

Figure1. Structures of proBDNF and mBDNF
The N-terminal side of proBDNF is cleaved to form mature BDNF. 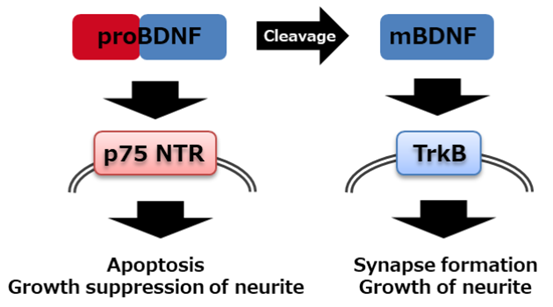 Since mBDNF has no specific sequence to proBDNF (Figure 1), mBDNF-specific detection is very difficult. To address this challenge, we developed Mature BDNF ELISA Kit Wako (product code: 296-83201) and Mature BDNF ELISA Kit Wako, High Sensitive (product code: 298-83901) as ELISA kits using an antibody with high specificity and detection sensitivity having an epitope on the N-terminal side of mBDNF (Figure 3, Table 1). The antibody used in these products has very low cross-reactivity with proBDNF, allowing specific and sensitive detection of mBDNF. The mBDNF levels of serum samples from female patients with major depression, manic depression, or schizophrenia tended to be lower than those in healthy individuals (Table 2). We also succeeded in the measurement of mBDNF in serum and plasma from wild-type and autism model mice using Mature BDNF ELISA Kit Wako, High Sensitive (Table 3). Based on the above results, this detection technology for mature BDNF that we have developed is expected to become a powerful tool in psychiatry.

Figure 3. Principle of Mature BDNF ELISA Kit Wako
We succeeded in the development of ELISA kits that can specifically detect mature BDNF
using an antibody recognizing the N-terminal side of mature BDNF.

The number of patients with psychiatric diseases is continuously increasing worldwide, and scientists are still actively engaged in research on psychiatric diseases. In this area, BDNF, which was introduced above, has been suggested to be involved in various diseases and is attracting growing attention. Our new products, "Mature BDNF ELISA Kit Wako" and "Mature BDNF ELISA Kit Wako, High Sensitive," are completely new mBDNF detection technologies that combine very high specificity and detection sensitivity, and may contribute to the area of psychiatry, which will become more active in the future, as a useful technology for the detection of mBDNF.