This article was written by Yasuko Matsui, FUJIFILM Wako Pure Chemical Corporation, for Vol. 85, No. 1 (January 2017) of Wako Junyaku Jiho.
The content of this article is from the time of publication. It is not the latest information due to new knowledge and changes in regulatory rules after original publication.

α-Glucosidase Inhibitory Activity Assay Kit (hereinafter referred to as "KIT") containing α-glucosidase enzyme with its enzyme activity being assured was developed. Combining with separately sold LabAssay™ Glucose enables measurement of α-glucosidase inhibitory activity of analytes contained in foods and others.

For α-glucosidase in the KIT, degradation activity using disaccharide (sucrose and maltose) as the substrate is assured, and is considered useful for determining α-glucosidase inhibitory activity values (IC50). The background of development and features are reported below.

The progression of lifestyle-related diseases such as diabetes, obesity, and dyslipidemia, or metabolic syndrome has become more serious due to not only increased consumption of animal food products but also unbalanced diet and overnutrition1). In particular, the number of patients with diabetes has been on the increase2).

At present, α-glucosidase inhibitors are extracted from various plants, and their application to foods that inhibit the increase in blood glucose level is being actively examined.

There have been several reports on the procedures for calculation of IC50 value of α-glucosidase inhibitors, but there were no marketed products such as a measurement kit. In addition, there were few commercially available products of α-glucosidase derived from mammalian small intestine, and for some commercially available products, the activity value was not assured. 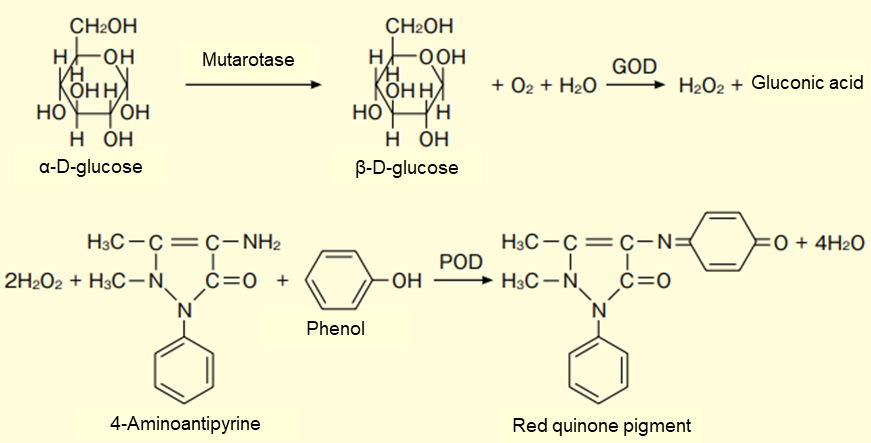 Before describing the development of the "KIT," the principle of measurement of LabAssay™ Glucose, which is separately used for calculation of IC50 value, is shown in Figure 1.

Principle of measurement of LabAssay™ Glucose:
When a coloring test solution is applied to the sample, the glucose in the sample is rapidly converted from α form to β form due to the effect of mutarotase contained in the coloring test solution. β-D-Glucose is oxidized by the action of glucose oxidase (GOD), and at the same time hydrogen peroxide is produced.

The hydrogen peroxide produced causes phenol and 4-aminoantipyrine in the coloring test solution to undergo a quantitative oxidative condensation by the action of coexisting peroxidase (POD) to form a red pigment. By measuring the absorbance of the red, the glucose concentration in the sample can be quantified.

Essentially, GOD reacts only to β-D-glucose but has a weak specificity also for maltose, which may increase the background level, resulting in failure to evaluate the inhibitory action appropriately.

Examination of Reduction of Variation by Enzyme in KIT

The enzyme contained in the KIT is a suspension obtained by taking from the brush border membrane derived from rat small intestine, and obtaining the optimal fraction by centrifugation. If the particle size is large, precipitation occurs immediately, causing variation in observed values when the measurer collects enzyme.

Thus, a manufacturing method for reducing the particle size to prevent the enzyme contained in the KIT from precipitating immediately was used so that the measured values should not vary. Using acarbose as an inhibitor, the test was performed 3 times. The results are shown in Table 2 (see Figure 3 for the solution preparation method).

To the substrate (maltose, sucrose) solutions in the KIT, add a serially diluted solution of a measurement sample (α-glucosidase inhibitor) and an α-glucosidase suspension in the KIT, allow to react at 37°C, and then heat in a boiling water bath to stop the reaction. Determine the content of free glucose using LabAssay™ Glucose, and calculate the IC50 value of the measurement sample. 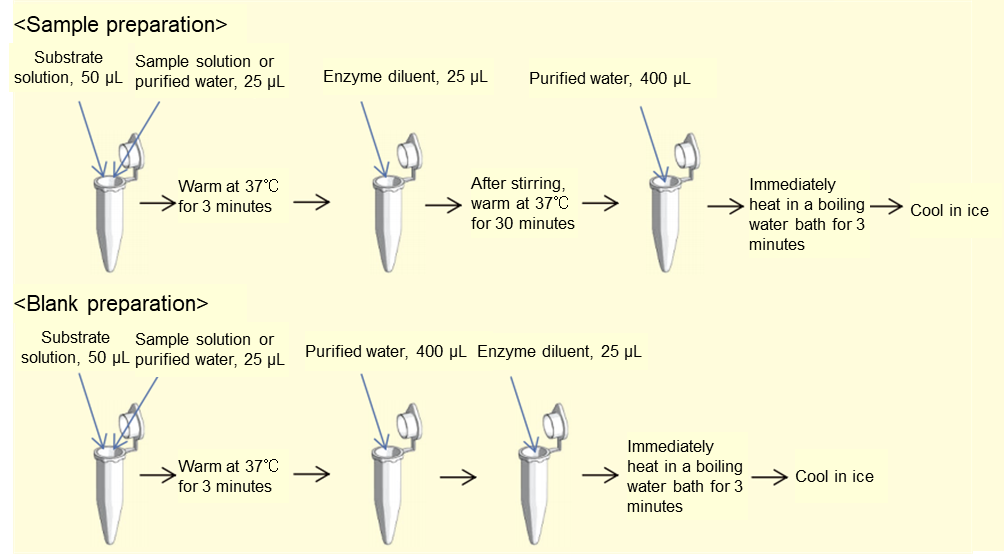 For details of the preparation methods for substrate solutions, enzyme diluent, etc., see the instruction manual attached to the product.

The development of the KIT enabled measurement of IC50 value of α-glucosidase inhibitor. We hope that in the future, the KIT will help to develop and explore various functional foods.