Adiponectin is an important cytokine secreted from adipocyte i.e. adipokines. It controls lipid metabolism and insulin sensitivity, showing anti-diabetic, anti-atherogenic, and anti-inflammatory actions. It is activated by insulin (1-3).

In human subjects, the plasma levels of adiponectin of DM2 patients are lower than those of normal subjects. The levels are further lowered in patients DM2 with coronary artery diseases, namely, DM2(CAD+)

The genes related to plasma adiponectin levels are also related to metabolic syndrome, DM2 and risk factors of cardiac diseases (8).

Another important point, i.e. relationship between adiponectin action and its molecular structure will be described later.

Expression of adiponectin is suppressed by glucocorticoid, and enhanced by insulin,IGF-1, and PPARgagonists (9). It is also strongly suppressed byb-adrenergic agents such as catecholamines via G(S)-protein-PKA-dependent route, and may cause catecholamine- induced insulin resistance (10).

Mouse adiponectin is composed of 247 amino acids, and the N-terminal 17 amino acids form the signal peptide. The single chain from 18 to 247 forms mature adiponectin, including one complement C1q domain and one collagen-like domain (11-14).

45-110: Collagen-like domain
48-107: Collagen region having repeating sequence of one glycine in 3 amino acids specific to triple helix structure serving as the rod part of C1q component of complement.
Prolines at 47,50,56, and 94 become 4-hydroxyproline after translation, and are important for stabilizing triple helix formation.
112-247: The domain corresponding to globular part of C1q, and contains 8 b-strands(underlined area).
Lysine at 68, 71, 80, and 104 are transformed to 5-hydroxylysine after translation. To these hydroxyl groups, disaccharide, Glc-Gal will be connected as O-linked glycoside. No N-glycoside was found in the molecule.

The monomer form of adiponectin is found only in adipocytes, and homomultimer, i.e. trimer, hexamer and 12-18-mers formed from adiponectin monomer are found in plasma.

It has been reported that the plasma HMW-complex levels reflect the situation of BMI, sex, body weight decrease, glucose tolerance, and insulin sensitivity of the liver better than total adiponectin levels (18,19).

Expression of adiponectin mRNA is enhanced by administration of thiazolidine derivatives, such as pioglytazone hydrochloride, which are the ligand of PPARg (peroxisome proliferator-activated receptor gamma), and as a result, plasma adiponectin level is increased.

TNF-a, on the other hand, is produced in adipocytes in a high insulin resistant state, and suppresses the expression of adiponectin. PPARg ligand restores this suppression by TNF-a (21-23). Adiponectin is a possible biomarker of in vivo PPARg activity. In an experiment using adiponectin defficient mice, it is suggested that adiponectin is an important factor relating to the recovery of glucose tolerance by PPARg through AMPK (AMP-activated protein kinase) pathway (24).

Adiponectin is believed to influence on cell growth, angiogenesis, and tissue remodeling of tussues by isolating various growth factors through binding with distinct affinity. The affinity is dependent upon the shape of complexes, LMW, MMW and HMW.

#1 HBEGF (heparin-binding epidermal growth factor)
Through receptor binding, promotes proliferation of various epidermal cells and fibroblasts. It is necessary in the formation and keeping of the heart. In squamous cell carcinoma EGF receptors are markedly increased. In human ovarian carcinoma, HBEGF is highly expressed.

#2 PDGF (platelet-derived growth factor beta polypeptide)
PDGF is present in a granules of platelets, and released at activation of platelets. It acts on the recovery process of wound by causing cell proliferation in the area of wounded tissue. It is also known as one of the promoting factors of arteriosclerosis.

Activation of AMPK in the hypothalamus enhances appetite. Leptin, which is thought to suppress appetite decreases the activity of AMPK in the hypothalamus, and ghrelin, on the other hand, activates hypothalamic AMPK. It has been reported that a pharmacological AMPK activating agent, 5-amino-4-imidazole carboxyamide riboside, when injected into the third ventricle or paraventricular nucleus, significantly stimulated food intake (29)
Two types of adiponectinreceptors have been found, AdipoR1 and AdipoR2.
AdipoR1 is expressed in many tissues including skeletal muscles, while Adipo2 is mostly expressed in liver. Both receptors are found in blood vessels, macrophages, and brain. Adiponectin activates AMPK via AdipoR1 in the arcuate hypothalamus, causing enhancement of food intake and decrease in energy expenditure. In fasting animals, adiponectin levels in plasma and cerebrospinal fluid is increased, and the expression of AdipoR1 in the hypothalamus is also enhanced, and these are lowered after refeeding. These facts indicate that adiponectin is working for saving energy expenditure in the central nervous system in a fasting state (30).

Specificity of the kit

Shibayagi's assay kit for mouse/rat high molecular weight adiponectin is specific to high molecular weight (HMW) complex. Adiponectin HMW complex reflects metabolic syndrome and DM2 better than other complexes.So, measurement of HMW would be more helpful in the analysis of the syndrome than measurement of total adiponectin.
Shibayagi's Mouse/Rat High Molecular Weight Adiponectin ELISA KIT is highly specific to adiponecti HMW as shown in the table and the figure below.

Brief description about the kit and operation

Rat or mouse serum or plasma : 10ml in the standard procedure.
In most cases, samples should be diluted to 25-50X using assay buffer (C) as shown in the table below. 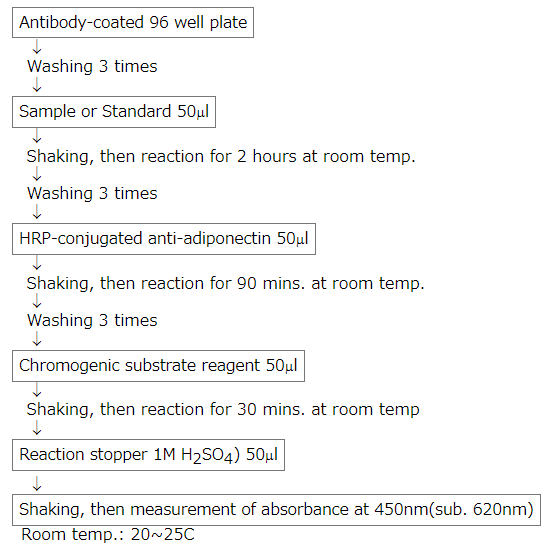 An example of standard curve

Six months from production. Expiration date is indicated on the container.

Results are expressed as Mean & SE

Assay data for other mouse strains